When I joined as a volunteer a few months ago, and was diligently reading through and trying to absorb the information in the buildings’ briefing documents, something jumped out at me from the information on the Henton ‘Tin Tabernacle’ chapel:

‘Interior fittings: The organ is an American Reed Organ, made by F Estey & Co. of Brattleboro, Vermont’

During subsequent chats with other volunteers, I heard it said that they found it quite surprising and puzzling that an organ made in an obscure part of the North-Eastern United States should find its way to the middle of the English countryside.

The Estey company (which originally made melodeons) was founded in 1852 by Jacob Estey, and their manufacturing base was indeed Brattleboro, Vermont. However, over the rest of the 19th Century and well into the 20th, Estey became and remained for many years the largest manufacturer of reed organs in the world. By 1869, production exceeded 300 instruments per month. Twenty years later, production was running at 13,000 organs a year and the company had built over 300,000 organs by the turn of the 19th/20th century. 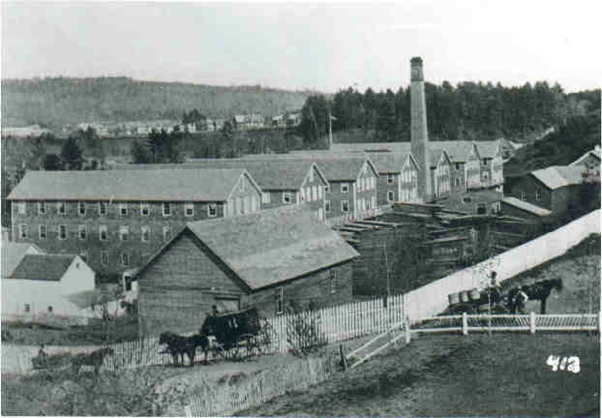 The Estey factory in Brattleboro, Vermont

Estey exported very widely and would certainly have had distributors and retailers in England.

In fact, Estey produced an ‘Acclimatized’ organ specifically for use in hot and humid climates, and these were much used by missionaries in Africa, Central America, and elsewhere.

During the Second World war, every US Army chaplain was issued with an Estey ‘field organ’; small, very simply constructed from plain timber, painted battleship grey and designed to fold up to be stowed in the back of a Jeep!

The business declined in the 1950s with the advent of electronic organs, which Estey did have a shot at producing. Unfortunately this wasn’t successful, and the company finally went out of business in the early 1960s.

Estey produced a wide range of models, from small ‘cottage organs’ to quite large instruments. Our organ is of the type known as a ‘chapel organ’, designed for smaller spaces and venues and therefore exactly right for Henton. Estey did in fact also produce pipe organs for larger churches and silent movie accompaniment, and I was amused to discover they also produced a model of chapel organ with a set of pipes fixed to the top. These pipes were simply plain metal tubes and did absolutely nothing, but presumably imparted some pipe-organ gravitas to a humble chapel reed organ! 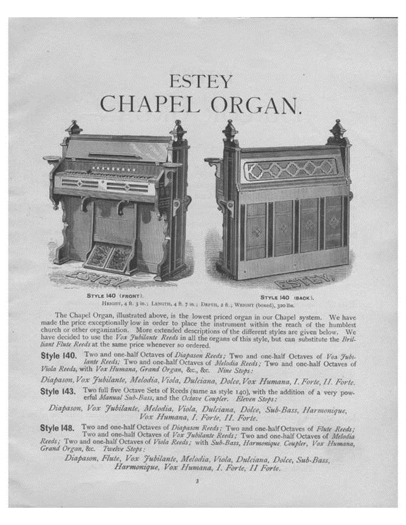 A page from the Estey catalogue of 1888

One interesting thing is that our organ appears to be black. And as far as I can see, this was the original factory finish (although it is possible that it was refinished when restored by Stevens). I’ve never seen another black one (they are usually plain varnished wood), and an image search online has failed to turn up any pictures of other black Estey chapel organs. So a little bit of a mystery there perhaps! The external design of the ‘chapel organ’ varied quite a bit over the years when it was in production, and I am currently trawling through some catalogues to see if I can pinpoint a date for our organ. I’m also trying to track down who the Estey dealers or retailers in England may have been.

You may be wondering why the Estey name caught my eye in the COAM documentation? Well, my wife has done quite a bit of research on her family history, and discovered a few years ago that she is in fact related to the Esteys. In 2017 during a trip to the USA we visited Sue’s cousin Gordon J Estey, who is now the senior member of the family. Gordon is an absolutely delightful gentleman and something of a collector of rescued Estey organs; his house is a bit of a museum, with an organ in almost every room! Gordon looks after some of the Estey company archives (which apparently were quite meticulous) and has very generously offered to help out with identifying the exact model of organ we have, dating it, and possibly (fingers crossed) finding out more about it such as who the original purchaser was.

So there may be an update on this shortly!