The Art of Haymaking Part 1

“Oh our hay it is mown and our corn it is reaped, our barns are full and we’ve garnered the seed…”

The last couple of months have seen everyone down on the COAM Farm toiling out in the hot fields under a bright sun helping with two of the most important summer jobs in the farming year: haymaking and harvest.

Part One (July): ‘The Art of Haymaking’

Before I arrived at COAM I was under the impression that ‘hay’ – an all-important winter animal fodder – was grass that had been cut and then just abandoned in the sunshine for a few days before being efficiently gathered up into the familiar bales. However, I was very quickly to learn how much more complex and delicate a process is the art of making good hay!

I did get the basics right: to make hay first of all your meadow full of grasses (diversified perhaps with some wildflowers, such as Hardheads), which has been ‘shut up’ since the Spring to allow it to grow tall, must be cut. This usually happens sometime between midsummer and the beginning of August; exactly when you decide to cut may be down to several different factors but the timing, ideally when several dry and sunny days are forecast, is critical to the nutritional quality of the hay. Cut too late (especially in a beautiful hot summer like we’ve had this year) and it will be little more than desiccated chewy stalks more appropriate for bedding than food. Cutting it too green will result in its needing more turning to dry it out which again decreases the nutritional quality, and the longer it is sitting out in the field after cutting the greater the chance of a rain shower to require even more handling and increasing the risk of mould.

Historically, hay was mown using the English Scythe, and I spent a day along with the rest of the Farm Team being trained in the use of this graceful implement and it’s close Continental cousin, the much lighter Austrian Scythe. To start with, we learnt a little of the historical changes in English Scythe production, particularly how advances in factory steel-making affected the shape and robustness of the blade. After we were shown how to adjust and set up each scythe to our individual proportions to enable comfortable and safe use and had had a lesson in technique, we were let loose onto the tall grass in Grey’s Field. 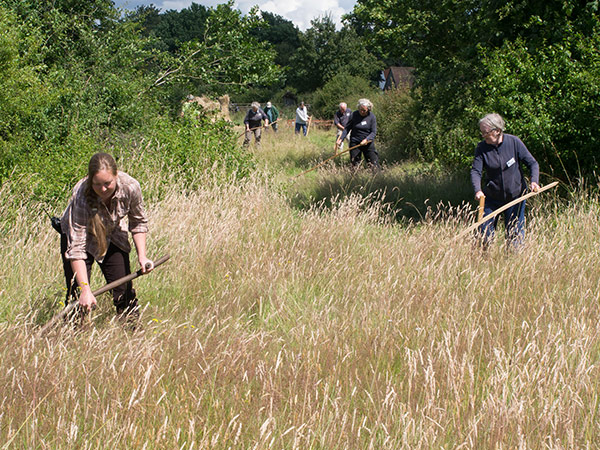 In Victorian times, a gang of men would carry out this task, one man following on in a line adjacent to the next, once the latter had got far enough in front that the swinging arc of his sharp blade would be a safe distance away. The traditional song ‘One Man Went To Mow’ apparently gives approximately the right timing for the start of each man in the gang: the leader starts off on “One man went to mow, went to mow a meadow…” with the second following at the start of the second verse (“two men went to mow…”) and so on. (Though quite what the dog – Spot – did, I am still unclear!).

Just as in much else when it comes to traditional farming methods, to mow effectively using a scythe the devil seems to appear in the detail. The idea is to lean slightly forward from the hips, swinging the blade in an arc through 180o from one side of the body to another and slicing through the grass stems as low down as possible, rocking gently from foot to foot to creep steadily forward. The trick to graceful and seemingly effortless mowing (which is much harder, and a great deal more effort, than it looks!) is in working with the weight of the tool, using the swinging action to help cut the crop and carry the blade back to start the next arc. Another critical lesson was in maintaining the level of the blade across the length of the arc to prevent it either from raising up too high or otherwise from digging into the ground – not only potentially dangerous but a sure way to quickly blunt the blade!

Once it is cut and lying in rows called ‘windrows’, the  drying grass must be turned regularly to ensure it is drying evenly and not fermenting underneath. In the past, this was all done using pitchforks. The invention of the horse-drawn hay turner in the nineteenth century speeded up the process somewhat although it must have been a ridiculous sight when it first arrived in the fields, as in action it looks something like a giant insect running along behind the horse, flinging hay high in the air as it goes as if searching crazily for some special treasure! I was lucky enough to take a turn at driving Joshua, one of our Shire horses, with this rather unique machine, under the guidance of chief horseman Robert MacKenzie. 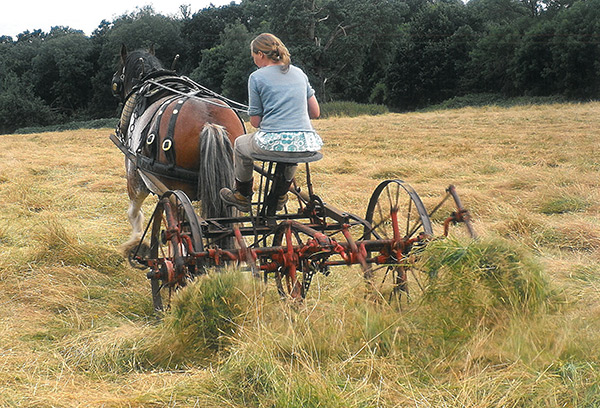 Josh pushed strongly into his harness as we started across the windrows at a smart pace; sitting high up almost level with his rump I had a good view across the field and the many Red Kites keeping a watchful eye for any unlucky rodents displaced by all the activity. I didn’t have much time for wildlife spotting however, as trying to keep Josh and the Hay Turner as straight along the windrows as possible and at a sensible speed for the implement took most of my concentration. Any spare attention was needed for maintaining my balance on the iron seat perched on top of the shaking, rattling, clattering, rather bouncy machine!

A familiar site in the fields of the past whenever rain was a possibility were ‘haycocks’. The grass-becoming-hay was piled up into egg-shaped mounds which allowed the water to run off, keeping most of the precious crop dry (a little bit like miniature hay ricks).  In the morning, the hay was once more spread out in rows, to carry on the curing and drying process. Observing how the shapes of the ephemeral haycocks endlessly alter as the grass stalks settle against each other and the top layers are moved around by the breeze, seemed to me to reflect the subtle shifts that constantly occur in the landscape. I found the process of building a haycock also particularly meditative, the craftsmanship required focusing my attention in a very ‘mindful’ way.

Once the hay is made, today we use machines to bale it up into manageable chunks. Historically however, it would have been pitchforked up loose onto waggons and carted to the rickyard where it was taken off the waggon again and built up in layers to create a ‘hay rick’. During the nineteenth century these large, almost house-shaped structures would have been a notable feature of the rural landscape, lined up along field edges through the autumn and winter months. A large, sharp implement called a ‘hay knife’ was used to cut off large slices as and when it was needed to be fed to livestock and the working horses.

We spend a few days loading bales onto trailers, using the Ferguson tractor or one of our other vehicles to take them round to the top of one of the arable fields, behind Skipping’s Field hedge. Here, they were unloaded and built into a big rectangular bale rick. Once again, there is an art to this, ensuring that the bales are arranged so that they tie each other in (a bit like ‘Sticky Bricks’, if you remember these awesome children’s toys!) maintaining the integrity of the stack as it gets higher and higher, and overlapping the edges and angling the peak to maximise rain runoff and keep the rick dry. The finished structure is about 4m high by 8m long by 5m deep and contains nearly 600 bales of hay, to help keep our hungry sheep, cows, horses and goats fed over the coming months. 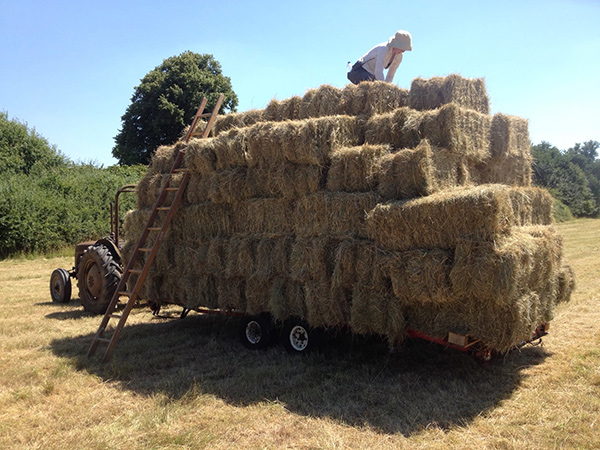 ‘Loading small hay bales with the Ferguson tractor and trailer’.