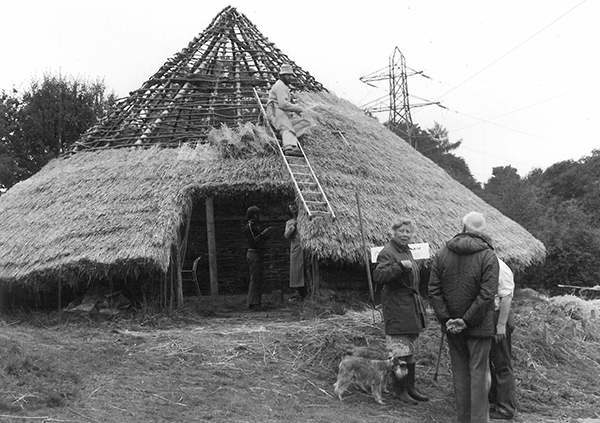 The Iron Age roundhouse being built at the Museum.

The Chiltern Society and Chiltern Open Air Museum have a shared history. The idea for the Museum was born on 11th June 1973 when at a meeting of the Executive Committee of the Chiltern Society one member, John Willson, reported enthusiastically on a visit he had made to the Weald & Downland Museum at Singleton.

It was suggested that the Society should consider starting an open air museum, similar to the one in Sussex, of old vernacular buildings: the past houses and workplaces of ordinary people – which would otherwise be demolished and disappear from the landscape entirely. The aims of the Museum would be educational as well as recreational: it would, the Society hoped, foster public interest in the architectural heritage of the Chiltern Hills so that they would come to recognise the importance of the buildings and become aware of the need to protect others like them in the future. Buildings selected for inclusion in the Museum would be typical of the domestic, agricultural and industrial ones found in the area, dating back to the earliest ones known, and would be used to demonstrate methods and materials through the ages as well as housing exhibits of agricultural implements, domestic equipment, furniture and local crafts to give a total picture of life in the past.

It was agreed that this scheme, although worthwhile, could only be contemplated if the right conditions prevailed; in particular, donation of suitable land where the buildings could be re-erected, and a person willing to donate a great deal of time and energy to establishing and operating the scheme. The idea was passed to the Historic Works and Buildings Group (HW&BG) for further consideration.

Members of the Society began to search for a suitable site and buildings whilst the Executive Committee visited and researched other open air museums (including Weald and Downland Museum, Avoncroft Museum of Buildings, Museum of East Anglian Life, Museum at St Fagans and various other smaller projects). Staff at the Museum at St Fagans told them in no uncertain terms that they would be mad to go ahead!

After much searching the team heard that Chiltern District Council had proposed the creation of a Country Park at Newland Park and that there might be a role there for a museum which would be managed by the Chiltern Society, through a charitable trust, with day-to-day management provided by a small committee of permanent staff employed by the trust.  Any profit made would be ploughed back into the Museum.

The Council soon abandoned the idea of a Country Park but the Society opted to continue the proposed Museum on its own. Work went ahead on every front, and it is quite amazing how much was done on a volunteer basis by people then who were also holding down jobs and looking after families (this dedicated volunteer support would continue long into the future).

The first rescued buildings were two barns at Hill Farm, Chalfont St Peter. The complex was surrounded by a housing estate but the buildings were listed (which had been overlooked by the developers and Planning Authority). Listed Building Consent was given in March 1976 for demolition of the farmhouse and two barns, on condition that they were moved to the Museum. Two medieval merchant’s houses on Watford High Street, threatened by an inner ring road, were also donated and were quickly followed by a granary at Rossway Home Farm, Berkhamsted (dismantling started with a little help from boys at Berkhamstead School). St Julian’s Tithe Barn from St. Albans, dismantled many years before and stored in the gaol there, was also donated to the Museum (which had to load and transport it). Permission was given to store all of these buildings at Newland Park, until the Museum had a lease and was listed as an entity on the understanding that if the project disintegrated everything would be discreetly cleared away!

By June 1976 the County Planning sub-committee, Chiltern District Council and the College had all approved the plans and fundraising began and on 20th November 1976, after 3 ½ years of labour, the first meeting was held of Chiltern Open Air Museum Ltd. On 21st October 1978, the Museum was officially ‘launched’ at a party to the press at the Mermaid Theatre.

1978 and 1979 were busy years and building work was intense, despite the fact that the Museum still had no lease: by October official permission to erect buildings, although again at the Museum’s own risk, had been received! Elliotts Furniture Factory was dismantled and moved; Wing Granary was moved in August 1978; the Watford Buildings were coming down; Rossway Granary was dismantled and re-erection commenced; Didcot Cartshed was being re-erected as the Museum’s workshop; a contract was awarded for the re-erection of Arborfield Barn and Manshead Archaeological Society started work on the first Iron Age House. Trees were planted; plans drawn up for the car-park and footpath diversion and plans were afoot for massive fundraising activity to supplement the small-scale operations carried out by volunteers and supporters. Most notably, the Museum’s first major grant was received: £15,000 from the Meaker Trust, which funded the re-erection of medieval Arborfield Barn. 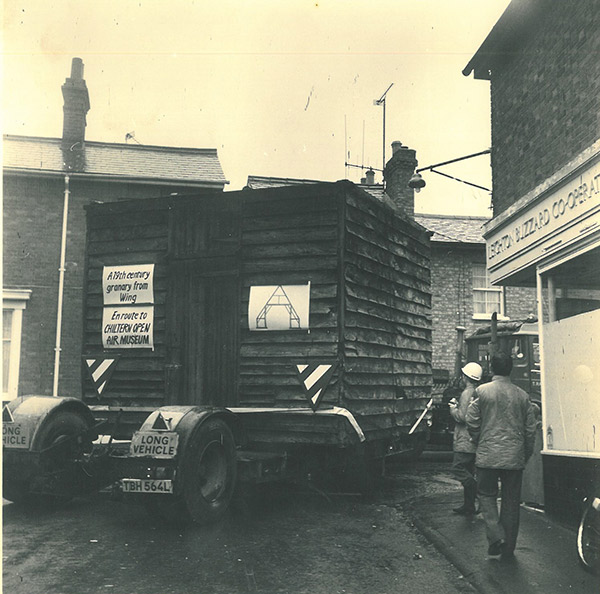 During 1979, the Museum opened exclusively to members of the Chiltern Society on several days, which were well attended and boosted everyone’s confidence for the future. On the 3rd May 1981, with a field for a car park and a footpath running right through the site, with a small shop in the ticket office caravan and teas served from another caravan, with Wing Granary, Didcot Workshop and the Iron Age House completed and work well advanced on Rossway Granary and Arborfield Barn, the Museum opened on a pouring-wet Sunday afternoon and 95 people braved the elements to support it. We were in business!

Since then a number of other buildings have been acquired, rescued from the threat of demolition and saved for future generations.  The Museum now incorporates 33 buildings, with 15 more still in store awaiting the funding to re-erect them (each will cost at least half a million pounds) and the 45-acre site has been further developed with the creation of a working Victorian farm and the addition of rare-breed livestock; hedges laid in the traditional local style; apple and cherry orchards and heritage crops.  A newly-refurbished Tea Room and adventure playground inspired by the historic buildings provide refreshment and entertainment for visitors, and activities to enthuse visiting families include opportunities to dress up, play with historic toys and games and even recreate the Museum’s buildings through lovingly-created scale models. On 2nd – 3rd July the Museum will be holding a small event to proudly celebrate the fortieth anniversary since its incorporation in 1976, and visitors are welcome to attend and help us celebrate.

Today the Museum, now employing 10 full-time and 6 part-time staff, is going from strength to strength.  Around 50,000 visitors are welcomed annually, with one third of these being schoolchildren enjoying an award-winning, immersive education programme. The Museum won ‘Gold’ in the Best Small Visitor attraction in the South East and ‘Bronze’ for the Best Small Visitor Attraction in England in 2013 and 2014.  A community hub, it is also supported by over 200 volunteers who in 2015 contributed 27,000 hours to the Museum. Museum staff and volunteers remain immensely grateful to the members of the Chiltern Society, who have continued to assist with its conservation work throughout the last 40 years through project funding, advice and support and, in thanks, are delighted to welcome Society members to visit the Museum with a two-for-one discount. 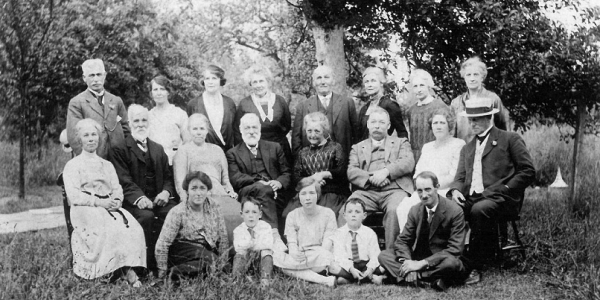