A History of Garston Forge at Chiltern Open Air Museum

Chiltern Open Air Museum is what is known as a ‘living’ history museum, where traditional working methods are used in our centuries-old buildings. Nowhere is this vitality clearer than in its Victorian-era blacksmith’s forge, once located in Garston, Hertfordshire, and now found at the heart of the museum: the village green. It sits at the centre of our footpath network, and when the hearth is lit and the doors are open, passers-by will hear the slow pumping of the bellows and the rhythmic beating of metal.

It is a working building in the truest sense of the word, used by local blacksmiths to make both decorative and practical pieces, such as the tree guards in our apple and cherry orchards, pictured below. The museum has always had a focus on conservation and sustainability, and having the facilities to provide authentic constructions and repairs on-site is a major boon. There are several smiths and volunteers who are trained to use it, and visitors can book experience days on which they learn how to make a few items of their own. 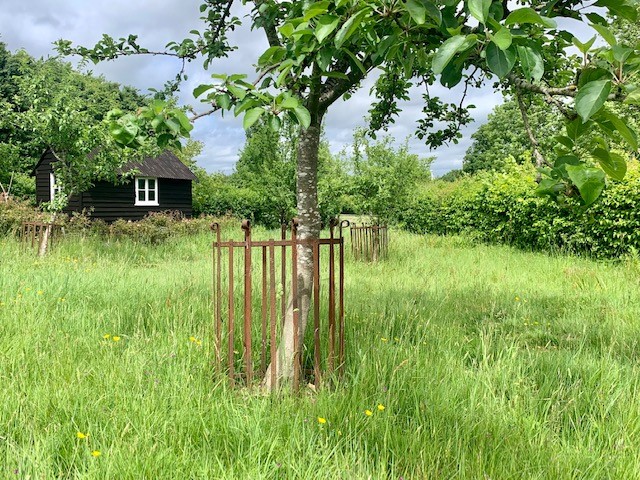 These tree guards were made in the forge.

The forge was built around 1860 and run by the Martin family, who were blacksmiths at Park Street and Leavesden, until 1926. It subsequently fell into disuse and was due to be demolished to make way for housing developments. Thankfully, the building was donated to the museum and dismantled by volunteers, led by Phil Buller and assisted by North Watford Venture Scouts, in 1982. It was kept in storage until resources were available and re-erected at the museum in 1984.

The forge is not alone in being a well-timed rescue. Many of the buildings that are now here at COAM were set to be altered, scrapped or destroyed because of changing regulations and demands on the land. The Chiltern Hills have a long and rich history, but like many places across the country, the demand for more housing and new facilities is high. This demand is neither unprecedented nor unreasonable, but it is the duty of museums like COAM to preserve that which it can, not just in its buildings, but also in its landscape and culture.

The balance between preservation and functionality can be a difficult one to maintain. Physical artefacts such as buildings inevitably decay over time and repairs and replacements must be made for their continued use. After all, the museum would not be very ‘living’ if its buildings, though unaltered, were unusable. For this reason, authentic changes are made, such as sourcing the forge’s hearth from a similar Victorian forge in Naphill, and the bellows from Leavesden Hospital. These replacements allow COAM to provide visitors with a view of history that is tangible and to which they are connected, something to be experienced rather than observed from a distance. They highlight the importance of preserving cultural history as well as physical history, so that good judgment may be used when telling the stories of our past. With its collection of ordinary people’s homes and workplaces, COAM’s aim has always been to invite visitors to take part in a history that is not simply preserved but sustained, in which their role is not just to remember the past, but to revive it too.

An interview with Mark Harding, one of the forge’s blacksmiths, can be seen below.