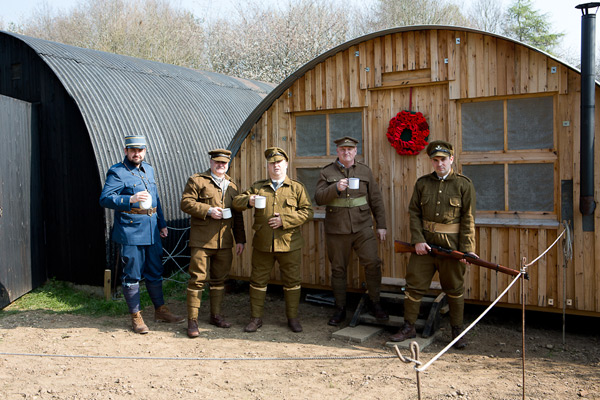 The Museum reconstructed a WW1 Nissen hut in 2018, thanks to a grant from the Heritage Lottery fund and a private donation. The front end of the Nissen bow hut has been set up to show what it would have been like for soldiers who slept in one during WW1. The rear of the hut tells the stories of local war heroes such as Maud Grieve, from Chalfont St Peter, who made herbal remedy cards and books and John Nash who used to paint front line scenes and once used our Hill Farm Barn as a studio. The rear of the Nissen hut is also used for educational workshops. 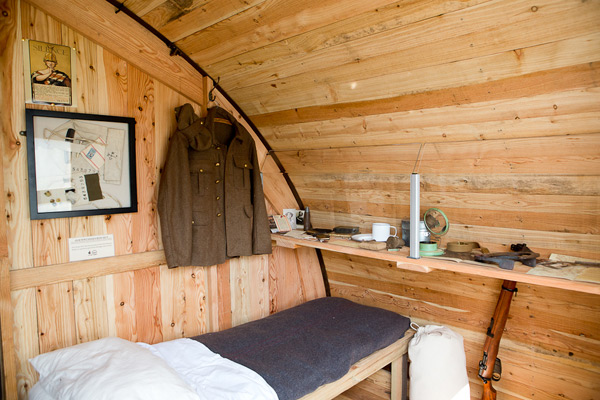 What is it?
Bow huts were originally designed by Major Peter Norman Nissen during World War 1 to meet the need for a building that was cheap, easy to make, move around, and build in different locations. They had lots of different uses, providing places for soldiers to sleep, eat, wash and relax.

How old is it?
The first Nissen bow huts were built in 1916.

What is it built from?
A framework of metal T-shaped ‘ribs’ or bows. These have a wooden lining between them, and the outside layer is made of corrugated iron sheets to make the hut weatherproof.

Early huts had a wooden lining, but this was often burnt in the stove by occupants during the winter. Later huts had corrugated iron lining which couldn’t be burnt!

Why is it here at the Museum?
The demand for the Museum’s education programme was growing and the Museum needed additional education space. We thought a WW1 Nissen hut would be a great addition to the Museum’s collection so we asked on social media if anyone knew of any that needed rescuing. We were actually offered two and with a grant from the Heritage Lottery Fund we were able to construct this Nissen hut on site.

The WW1 Nissen bow hut stands next to the WW2 Nissen hut and opposite the 1940s prefab and ‘Dig for Victory’ allotment.

Watch our video about our bow hut