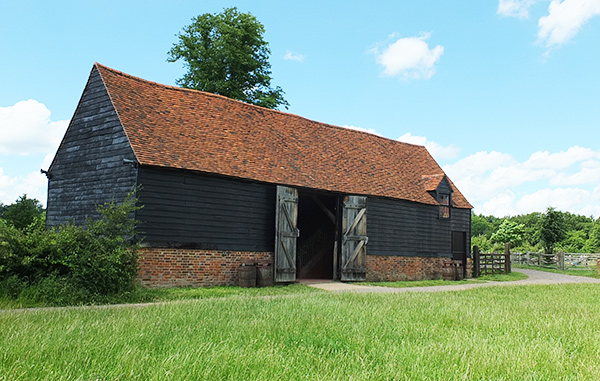 Skippings Farm was once part of the Newland Park Estate and local residents may remember Skippings Farm in Chalfont St Peter (now incorporated into the Epilepsy Centre on Chesham Lane). In 1993, Chiltern Open Air Museum was delighted to be able to rescue one of its buildings, a good example of a traditional ‘Chilterns Barn’, which now resides in the beautiful setting of the Museum’s Village Green. The barn would otherwise have been demolished as it was redundant and posed an obstruction to development plans for the site. 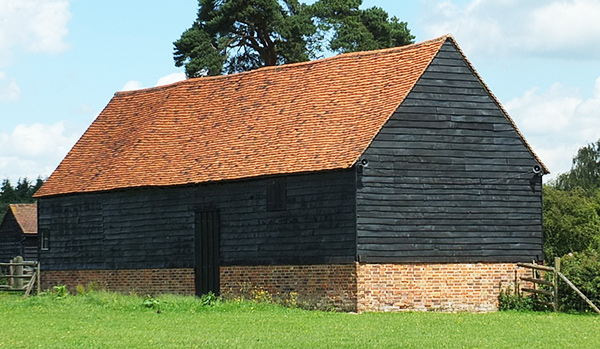 Construction:
An oak framed barn of three bays, with a later stable and hayloft added to the North end, the building rests on a high brick plinth wall. It has a pair of doors centrally in the east wall, with a single door opposite. The framing and brickwork suggest there was a much wider doorway at some time. The roof trusses have raked Queen posts. The stable is probably a later addition; the partition between the barn and stable was of soft wood. A simple oak frame has been put back to provide support for the gallery. One end of an original floor-beam survived, giving the evidence for the floor in the stable. It required extensive repair and restoration before it could be opened to visitors and this work, which included replacing most of one of the original gable walls, some of the main oak posts, approximately 15% of the clay roof tiles and 50% of the brick plinth.

During the barn’s re-erection in the summer of 1994, the Museum’s team of staff and dedicated volunteers were fascinated to discover more of the building’s hidden architectural history. The brickwork showed that the main doorway had originally been much wider, and there was evidence of a porch or wagon entrance which had been removed at some point (following which those original builders then ‘bodged’ the repairs to the brickwork!).

Very little ‘concrete’ information (pardon the pun!) is known about the history of this enigmatic building. It’s thought to date from the 18th century, although no precise date has yet been found in local records, although evidence from the structure of the building itself suggests that it had been extensively re-built at some point. When it first moved to the Museum it was occupied by local charity ‘The Hawk & Owl Trust’, and a beautiful oak gallery and staircase were built into it. The Trust paid for the dismantling, repair and re-erection of the building. The Hawk and Owl Trust no longer use the building but the addition of the beautiful staircase has given it new life as a perfect venue for weddings and celebrations. The barn is also currently used for events and school activities. The old stable is used as a catering outlet during the summer and the upstairs office is used by the Museum’s Site and Farm Manager.