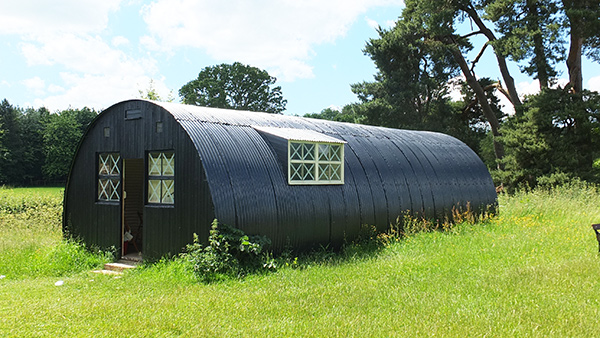 Nissen huts were invented during the First World War.  They were cheap and easy to put up – the record time for construction is 1 hour and 27 minutes. Many huts were used as temporary housing after the Second World War. The original use and age of the Museum’s Nissen hut remain mysterious.  It had already been moved at least once before arriving at a farm in Sewell, Bedfordshire, from where it was donated to the Museum. The hut was dismantled and moved to the museum in March 2008 and re-erected in 2009. 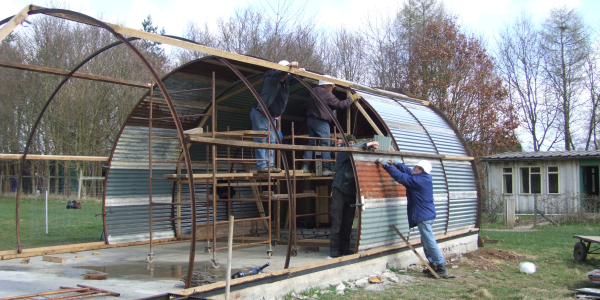 Nissen Hut under construction by volunteers

What is it built from?
The hut has steel ‘ribs’ on a concrete base. A wooden frame is built on these, with sheets of corrugated iron nailed to it.

What’s inside
Inside is a WW2 RAF briefing room – aeroplane crews would be given their flight instructions and targets here.

There are aeroplanes hanging from the ceiling. Plane crews and aircraft spotters had to be able to tell the difference between friendly and enemy aircraft by their silhouettes, or outlines. it’s hard! 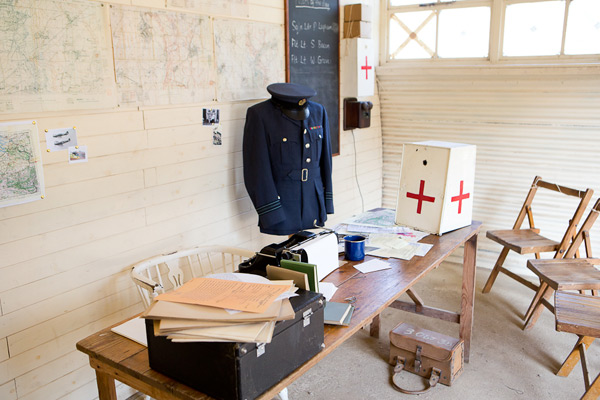 About Nissen huts
Nissen huts were developed during the First World War by Major Peter Norman Nissen of the 29th Company, Royal Engineers. The design was formalized after three prototypes were constructed in April 1916. At least 100,000 were produced in World War 1. Nissen patented his design in 1916. For this work he was promoted to Colonel, awarded the DSO (Distinguished Service Order) and paid royalties on the sale of huts after the war. Nissen Huts came in three sizes: 16ft, 24ft and 30ft (width). The 16ft span usually had 6 bays, making an overall length of 36ft 6 ½ inches, though due to the design and construction they could be made up of any number of bays. They were cheap and easy to put up. A 16ft hut could be put up in 6 hours by 4 men. The record is 1 hour and 27 minutes. Many huts were used as temporary housing after the Second World War.

The Museum’s hut seems to be a mixture of old and new style components. The windows are an earlier type, with the top half opening inwards, hinged at the bottom, and the door opens inwards. It is designed to sit on a concrete slab.

The hut consists of six curved steel ‘T’ shaped ribs, spaced at 6ft and half inch intervals, bolted to 6in x 2in sills, in turn bolted down on a concrete slab. 4in x 2in timbers are laid across each end between the sills to take the end walls. Each rib consists of three sections bolted together. The outer covering is vertical corrugated iron sheets nailed to wooden purlins which are fixed to the outside of the ribs with hook bolts. Three overlapping sheets cover the arc of the roof. Internally, horizontal corrugated iron sheets joined by corrugated “sliders” sit on the edge of the ribs between the spines. The sliders consist of two 5in wide pieces of corrugated iron, fastened together along the center with a washer between them as a spacer. They slide onto the edges of two adjoining sheets securing them together. The joined sheets are held down onto the ribs by wires strained with a ratchet device. Each end is made up of five wooden sections with a central door. There is a window in the sections either side of the door. The floor would normally be a concrete screed between the cills. The rear end has two large doors between the two outer sections.

The WW2 Nissen hut stands next to the WW1 Nissen bow hut and opposite the 1940s prefab and ‘Dig for Victory’ allotment.