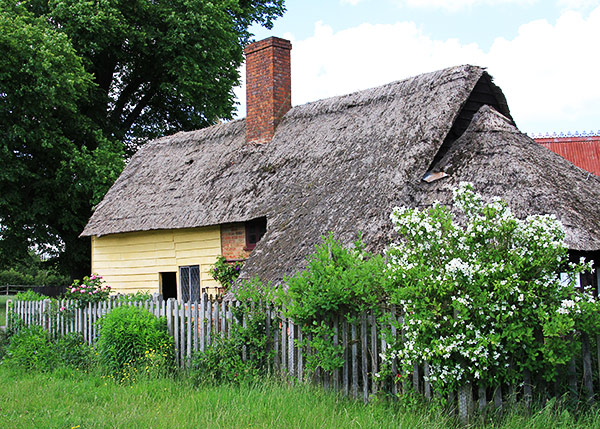 An 18th-century barn converted into cottages 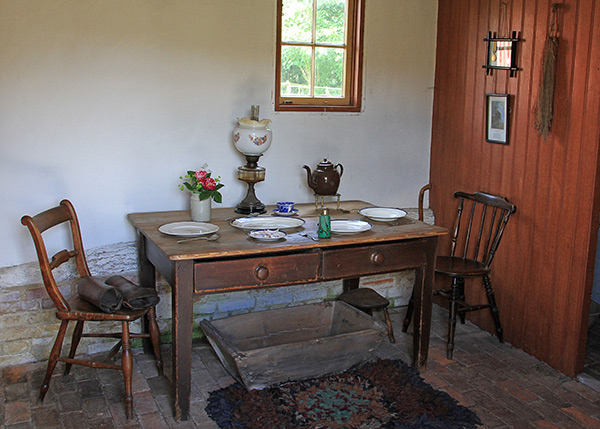 These are two cottages, side by side, which have been restored to show two significant periods in the life of this building. The cottage nearest the road interprets the 18th century and the cottage with the fenced garden depicts the building as it was in the 1940s. The building came from Leagrave, near Luton, Bedfordshire, and was rescued by the Museum after it had been condemned as unfit for human habitation in 1982. A careful survey of the building, and other research, has revealed a fascinating history that is summarised here.

The building started life in the early 18th century as an agricultural building, thatched with long straw and weatherboarded on all sides with central double doors at the front. In the late 18th century the barn was converted into two labourers’ cottages: the chimneystack and bread ovens were built, doors and windows were inserted, and an upper floor was put into the building. The outshot at the gable end – now the Cobbler’s shop – also dates from this period. The Museum has restored the cottage nearest the road to this period in the building’s history, and the form and furnishings of the cottage are appropriate for the 1770s. Many alterations were made in the 19th and early 20th centuries. Larger window openings were made, the weatherboarding was stripped off the back wall and replaced by lath and plaster, and later brick infill replaced the weatherboarding on the front wall. Extensions were built onto the front. The Museum has restored the cottage further from the road as it might have been in the 1940s. Although by this date the bread oven was no longer in use and a range had replaced the open hearth, there is in fact little difference from the 1770s cottage in terms of internal living space.

In 1851 there were 7 members of one family living in one of the Leagrave Cottages Joseph and Rebecca Thomas – Agricultural Labourer and Straw Plaiter. And their children: Emma (17), Esther
(12), Caroline(6), Straw Plaiters, Joseph (3) and Dinah (7 months).

Wood
The cottages are timber framed. The 18th century cottage is weatherboarded.

Straw
The roof of both cottages is thatched with wheat straw.

Clay
Both cottages are built on a brick plinth. A brick infill replaced the weatherboarding at the front of the 1940s cottage.

Glass
The rear window in the 18th century cottage is of blown glass. You can see the base of this sheet in one of the panes on the rear wall.

Lead
Some of the windows in the 18th century cottage have panes separated by leadwork. 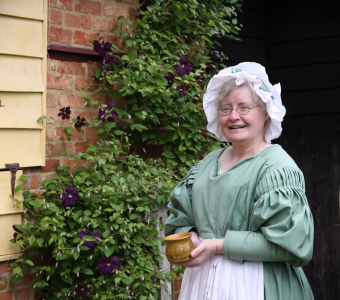 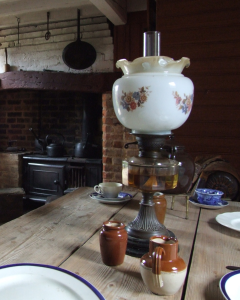