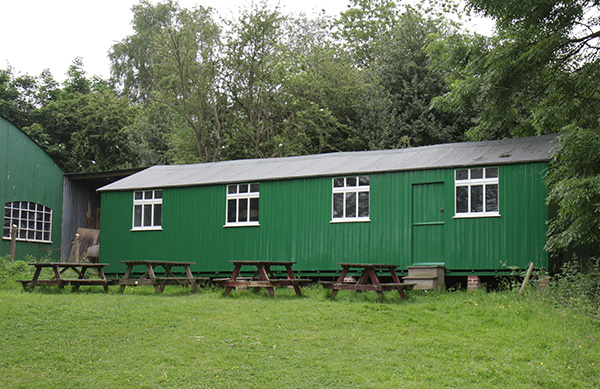 The Gerrards Cross hut is a wooden pre-fabricated building. Little is known of its early history, though it is believed to date from the First World War. It was re-erected next to the church in 1936 for use as a Sunday school, a function that had continued until the time of dismantling. The original Sunday school sign continues to hang above the entrance. The building was also used as a Scout hut. When the gable over the door was stripped the word “MISSION” could be seen very faintly.

Construction
A prefabricated wooden building, approximately 40 feet long by 15 feet wide. It has a door in one end, and a second door in one side near the opposite end. This door is a ‘stable door’, though this is unlikely to be original. There are four windows along each side. The walls are 7 feet 5 inches high, with vertical tongued and grooved boards externally, and plaster internally. At Gerrards Cross it sat on wooden bearers supported on concrete blocks. Approximately 10% of the external boarding was replaced and a further 5% repaired. One section of wall required a new sill and a new stud was fitted to one side of the side door. Minor repairs were carried out to the floor sections. One joist was replaced, two new bearers were made and the exterior has been painted with Dulux Weathershield paint in Buckingham Green.