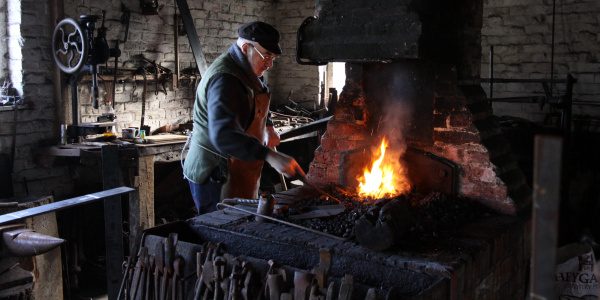 The forge was built around 1860 at Garston, near Watford. From the early 1860s until 1926, members of the Martin family practised their trade in the forge. After it ceased to be used as a forge, the building was used for storage until the site was sold for development in 1982 and the building was donated to the Museum. It incorporates a wide variety of materials. The walls are of bricks, many of which have the initials ‘JC’ cast in them (indicating their production at John Chapman’s brickworks at Bucknalls Lane, Garston). The forge was originally in a yard and, to recreate this environment, the Museum has built a brick and flint wall outside it. Such walls are typical of the Chiltern area, the flints found in the soil are free, these combined with brick provided a decorative effect.

The roof is covered with slate. Many of these would have come by canal from North Wales; their provenance is indicated by their colour (North Welsh slate is dark grey; slate from Cumbria is purple). The roof has clay ridge tiles with decorative points typical of the Victorian era. The floor of the forge reflects functional constraints. The area where the horses would stand to be shod by the farrier has timber baulks which provide a non-slip surface; bricks form the step by the door and stone covers the floor around the hearth to provide a hard, fire-resistant working surface. 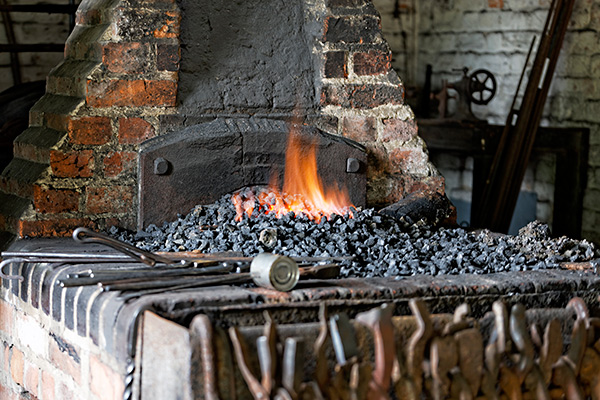 Tyring ring (outside)
Cast iron (0.5 Tonne). This provides a level surface for putting iron tyres on wooden wheels. The hole in the center is for the hub of the wheel.

Leather
Bellows, which are kept supple with an annual application of Renaissance.

Stone
Setts in the floor laid in the original patterns.

Floor
Setts: stone around the hearth provides a strong fireproof floor. Sleepers – wood, provide a non-slip surface for horses while a farrier shoes them.

Hearth
Brick built with one edge of blue engineering bricks. Two spaces for fuel beneath the hearth. The Tue iron channels air from the bellows into the hearth.

Wood
16 wooden sleepers form the floor area where horses would have stood. A very strong wooden bench supports the vice. 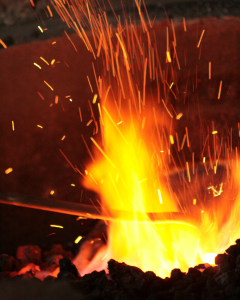 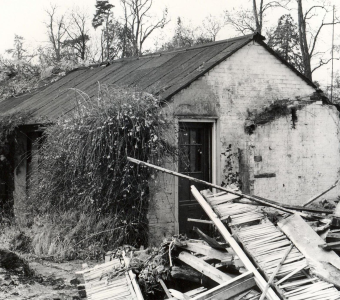