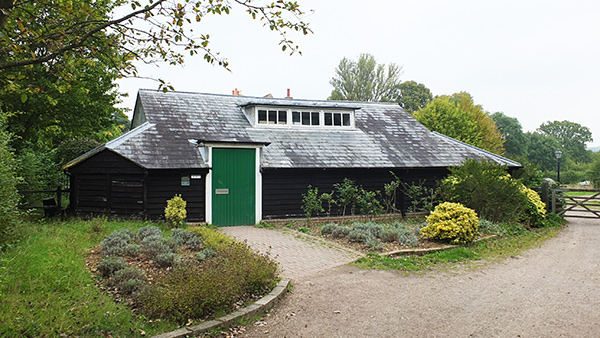 There was some concern that the building was not from the Chilterns. It was collected as a functional building to house the ticket office and introductory exhibition, thereby releasing buildings collected from within the Museum’s defined region for exhibition in their own right. However, the Museum’s Articles of Association enable it in theory to collect from anywhere in the country. Little information has been found to date. The Post Office Savings Bank was built in 1899. The building is not on the 1894 OS map, but can be seen on a 1921 map, still with four corners. The building when built had four corners, the cut off corner by the entrance was a later alteration to improve access around the building – date unknown. The single ‘entrance’ door was a later alteration of unknown date. The building was donated by the Department of the Environment, who paid the transport costs.

Construction
The building is made of wood. The outer walls were built in sections, but is not prefabricated. The roof is supported by an arcade structure, comprising two 33ft arcade plates, supported on four posts, connected with four tie-beams and braced. The overhanging ends are supported by two pairs of struts, bearing on the end walls. The outward thrust is restrained by four pairs of tensioned tie-rods. The four posts sit on stone pads. Approximately 1,000 extra slates were mixed in with the originals. The walls sit on a brick plinth. Most of the building is original; including the arcade plates and posts, wall sections, cladding, the three pairs of rear doors, most of the roof boarding, rafters, approximately 60% of the slates, and the gable end pairs of tie-rods.