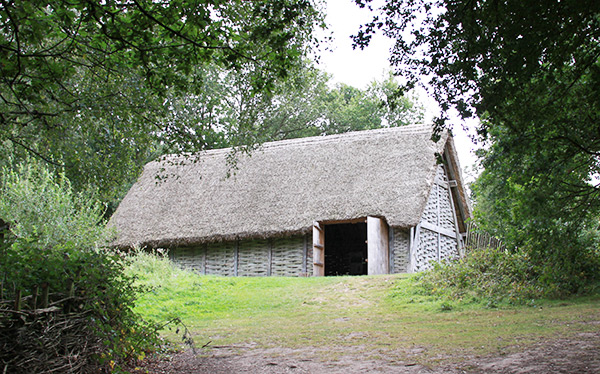 The barn is a cruck-framed building, with the weight of the roof and the walls supported by four pairs of cruck blades. Cruck blades are curved beams made from a single piece of wood, split length-ways, giving a pair of identically curved timbers. The walls consist of upright posts filled in with split oak wattles. All the timber used in the barn is oak, and the walls and cruck blades sit on a plinth wall made of flint. The roof is thatched with wheat straw. The entrance is unusual, being in an end bay rather than the center of the front wall as is more common. There is no evidence that there was ever another doorway in the rear wall of the barn, so the building would not have been suitable for threshing grain and was probably therefore used for storage of either produce or livestock. 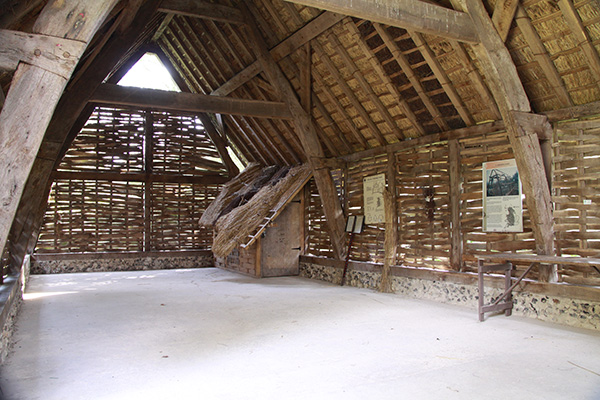 Straw:
Wheat straw, used as the top coat of our thatched roof, sheds water naturally from the roof. It should have an effective life of 20 to 30 years (depending on the variety of straw used and the local micro-climate). It does not last so long if it remains damp for long periods. Bundles of straw, known as ‘yealms’, are placed in layers with the layer above overlapping the layer lower down the roof. Twisted hazel spars are used to hold the thatch in place. This roof has been thatched with techniques that are hundreds of years old. The top layer that is seen from outside is called the ‘weather-coat’ and is thatched using the very best long straw. The layers underneath, the base coat, are constructed of other local plant materials. If you look carefully you can see lots of different types of plant material including shoof grass – a local coarse grass, heather and bracken.

Wood:
The main framework of the barn, including the four cruck frames, is made of oak. The roofing material is supported on wooden rafters, split oak battens run across the rafters. The joints are held together by wooden pegs and each cruck is made from two halves of a split oak trunk. Oak was the preferred material for this type of construction, although elm and other locally available timber could have been used. Green (unseasoned) oak was used in construction as seasoned oak is as hard as the iron tools that were used to work it! The joints were fixed in place by oak pegs. Oak contains tannic acid and this would affect iron nails. Wooden pegs were also cheaper than iron, and easier to obtain. The sill, the lowest horizontal timber, supports the ends of the crucks. The spaces between the parts of the frame are filled with woven split oak panels. These were woven from green oak, which is naturally springy. The woven walls allow air to circulate through the
stored produce, keeping it dry.

Stone:
Flints are used for the low plinth or wall because they are locally available and, more importantly, they stop the groundwater making the timbers wet and thus prevent rot.