‘I had a little nutting tree and nothing would it bear
But little silver nutmegs for Galligolden fair.

Twenty pins have I to do, let ways be ever so dirty.
Never a penny in my purse, but farthings five and thirty.

Betsy Bays and Polly Mays they are two bonny lasses.
They build a bower upon the tower and cover it with rushes.

Pardon mistress, pardon master pardon for a pin.
If you don’t give us a holiday we won’t let you in.

Jack be nimble, Jack be quick,
Jack jump over the candlestick.’

You may have come across verses like these and presumed that they are simply nursery rhymes and have no real meaning. In fact, they are all examples of “tells”, poems used to teach children to count and to develop speed in their lacemaking. To “tell” is another word for “count” as in the word “teller”, a person who counts votes. Some tells are much longer and develop into a whole story.

But when and where did lace originate? There is pictorial evidence from the late fifteenth century of simple plaited laces used on costume, and this is consistent with the statement by the author of a bobbin lace pattern book — the Nüw Modelbuch — printed in Zurich in 1561, that lace was brought to Zurich from Italy in about 1536. What is certainly true is that the second half of the sixteenth century saw the rapid development of lace as an openwork fabric, created with a needle and single thread (needle lace) or with multiple threads (bobbin lace). 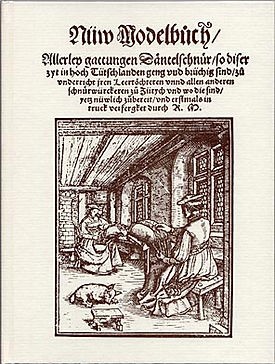 The earliest form of lace, needle lace, was slow and difficult to make and gradually bobbin lace took over. Bobbin lace is generally quicker to work than needle lace, and skilled workers were soon able to copy needle lace designs. Details of such lace can be seen on hundreds of portraits from the sixteenth and seventeenth centuries. Bobbin lace was the kind that was brought to England in the 16th century by Flemish Protestant exiles fleeing from the persecution of Philip II of Spain between 1563 and 1567. It is recorded that amongst those refugees were makers of “bone-lace”, so called because they used bone bobbins or sharpened bones as pins. By 1568 the refugees had reached Bedfordshire and Buckinghamshire, bringing with them their lace-pillows, bobbins and parchment patterns. Later, around 1820, a Huguenot exile and his two daughters settled in Coggeshall. The daughters were skilled in making tambour lace, so called because the net forming the groundwork of the lace was stretched tight on a wooden hoop like a tambourine. This later developed into making lace onto which were sewn beads and sequins for the fashion industry.

Great Horwood was a typical village where lace-makers worked. In order to get the best possible light they sat outside when they could.  On cold and wet days, they would sit in windows.  Three or four lace-makers would often congregate in a bay window for maximum light, often with a ‘chaddy pot’ (this was similar to a warming pan, filled with hot coals) tucked under their skirts for warmth.  When it was dark, they sat around one candle surrounded by special glass reflectors called flashes on a wooden stand.  These maximised the light, and rush bags were attached to the stand to hold the flashes when not in use.  Lace-makers worked long tedious hours and often ended up with very poor eyesight as a result. 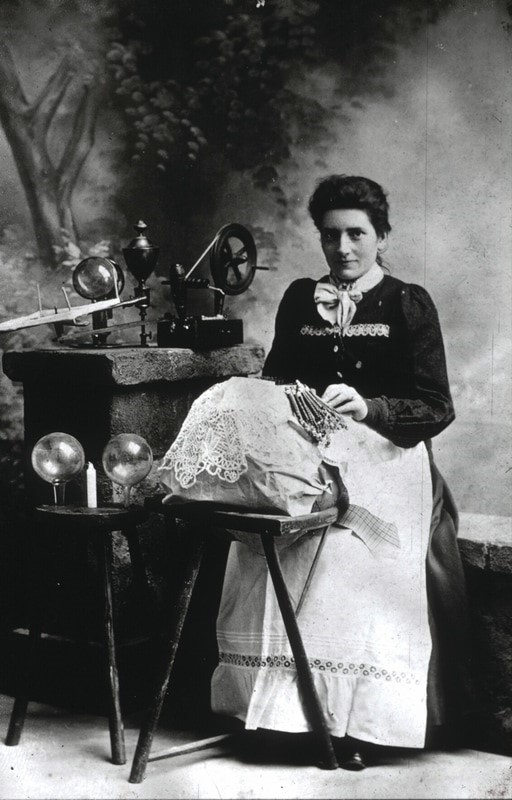 Lace-maker, Clara Ridgway (nee Smith), is pictured here surrounded by the tools of her trade. She is working at a lace pillow, with characteristic bobbins, resting on a three-legged ‘lady’. By her right shoulder is a bobbin winder, and on the floor to her right is a candle stool with flashes.

The lace pillows were round cotton bags stuffed with straw.  The straw was cut into small pieces and hammered well to make it hard enough for pins to go into.  The pillow was placed partly on the knees and partly on a three-legged pillow-horse called ‘the lady’.  The pattern was pricked on to a piece of parchment and attached to the pillow by special brass pins.  A pin cushion was pinned to the right-hand side of the pillow and traditionally was heart shaped.  It was stuffed with bran, which was slightly oily thus preventing the pins from corroding.  The bobbins were wound with the thread in pairs.  They were made of wood, ivory or bone. The bobbins were weighted with spangles.  A spangle was a ring of brass wire threaded with glass beads. 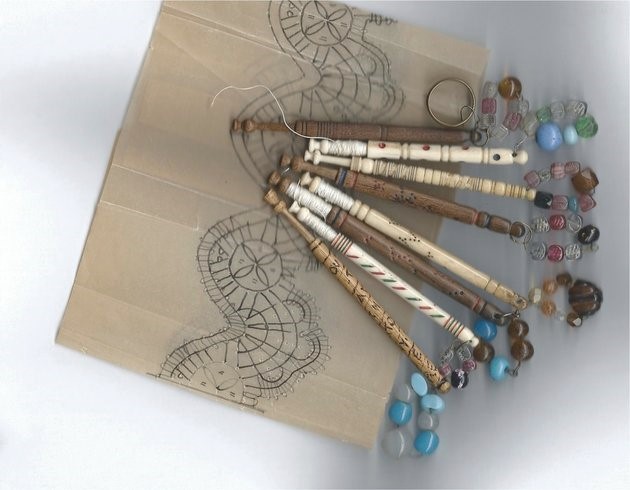 A Buckinghamshire lace pattern with bobbins.

Children as young as four were taught to make lace by their mothers who used to hang two pairs of bobbins on the side of their lace pillow and began to teach them basic skills.  Not only girls were taught, but also boys. The finished lace would be collected by a salesman and taken to market.  In the mid-19th century, the going rate was one shilling (5p) a day, out of which the lace-makers needed to buy threads.  This was more money than could be earned by domestic servants and more than an agricultural labourer was paid.

​Many villages around Great Horwood had lace schools at this time, teaching lace-making, reading and writing to both girls and boys. Great Horwood probably had one, but its location is unknown. Maybe it was held in the church before the Church of England school was founded there or perhaps small lace schools were held in people’s homes.

In the 1851 census there were 102 lace-makers in the village.  They varied in age from 9 to 82 years.  Two pauper lace-makers from Great Horwood are listed at the Winslow workhouse in the same census.  In 1861 there was a total of 134 lace-makers with an age range of 5 to 73 years, and in 1881 there were 111 lace-makers aged 10 to 77 years.  In the early part of the 20th century lace continued to be made in Great Horwood.  However, due to the introduction of machine lace the industry was in steady decline and by the second half of the century had effectively vanished 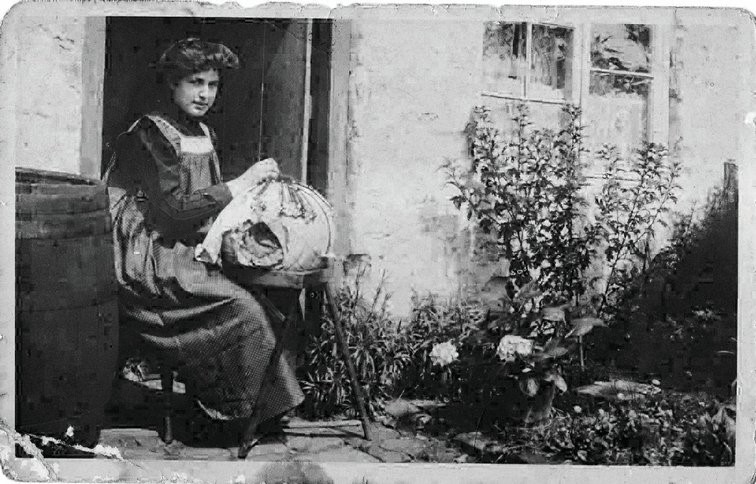 Some of the descendants of lace-makers of the 19th and 20th centuries still live in the village, including surnames such as Barfoot, Marks, Ridgway, Viccars, Hancock, Lambourne and Mallet. 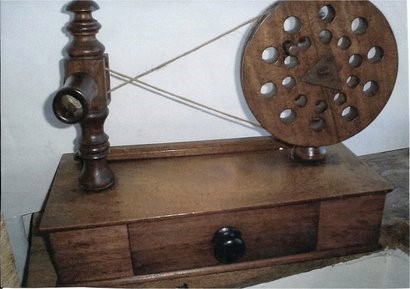 I am grateful for the permission of Rita Essam to include some of her article and photographs which illustrate the article so well. Please note that there should be no unauthorised copying of the photos.