Jess the sheepdog at 10 months 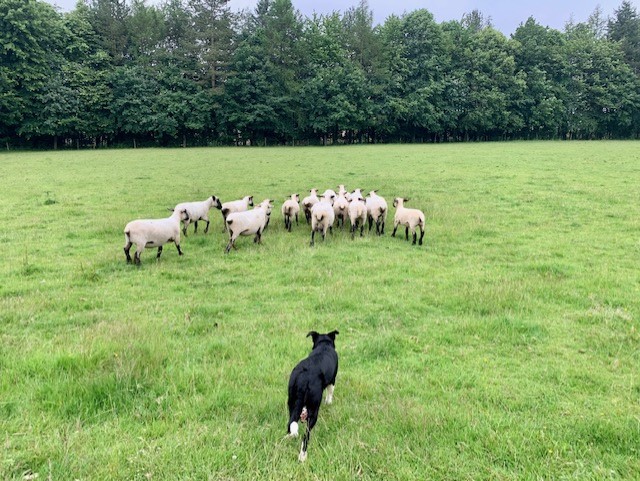 Jess is progressing well at 10 months

Well, it’s been a while since I updated you last and there are two reasons for that, firstly with summer coming finally my spare time has decreased considerably, the garden taking most of it, secondly the training of a sheepdog goes through phases, and this one is a bit monotonous! Some are due to the dog maturing and suddenly catching on, and some are dictated by me. An example of this is the second stage of training which we were entering when I last wrote. The first stage is to get the dog running around the sheep and then getting her to stop on the opposite side to me. Once we have worked on that for a few weeks then stage two involves a lot of me walking backwards doing figure of eights around the field as the dog naturally moves from side to side balancing the sheep on the opposite side always keeping the sheep between us. During this stage we start the session by encouraging the dog to run out from my side around the sheep to the other side, only a few yards away initially but this is the beginning of the out run that maybe developed into many hundreds of yards and in some cases half a mile or more up in the dales and mountains.

What we are trying to instill within the dogs brain is the desire to go out and gather the sheep and bring them back to the shepherd so this involves weeks of repetitive work walking up and down the field very gradually increasing the distance she has to run to get behind her sheep. So this is what I have been doing for a large proportion of the time throughout May and June and so there hadn’t been much to tell you really. However during this time the dog is maturing and gaining confidence and I am constantly commanding her one way or the other which she slowly begins to understand and respond to, I can then use less body language and movement and more simple commands. She still makes plenty of mistakes as she reacts to the movement of the sheep rather than my command but as time goes on she makes less and less errors.

Expanding her experience involves changing sheep and field if we can, so when we moved last years lambs into Skippings field with plenty of longer grass it was the ideal time to increase her outrun distance and with the sheep hiding under the trees it makes her use her brain to work things out. Trees are also useful for helping with this as you can set up the situation so that she has to go out around the tree to get to her sheep thus keeping her distance from them. A sheepdog must go out in a sort of pear shape ideally to get to the back otherwise if the dog ran straight at them the sheep would take off into the distance. This was the first time she had run so far and she went beautifully out and round them the first time of asking even ignoring the cows who, much to my relief, seemed equally uninterested in the little dog racing by them. She was however happier to run on the right side rather than the left so plenty of work on that side with lots of encouragement has eventually pretty much cured that and she’s now fine on both sides and we just practice practice practice!

During May I began to introduce whistle commands along with the verbal ones so that she began to associate both with a certain instruction and she now responds well to both. For the last couple of weeks I have been stepping things up by the biggest change to her training yet. Up until now it has all been about the dog gathering sheep, bringing them to me and holding them against me, which means she can always see me for reassurance. During June we began the attempt to do the opposite and introduce what we call driving, that is pushing the sheep away from me and therefore working for the first time without me in sight. We start gradually by stopping her going round and asking her to walk at the sheep whilst at the side of me, I will walk alongside her for encouragement until after a few days I can walk directly behind her so she cannot see me but I am still talking to her all the time to reassure her. Over a week or so we increase the distance until she can go from one end of the field to the other and then I can ask her to go around them and bring them back. We also get a bonus during this exercise as she cannot gain any clue as to which way I want her to move so she has to rely on my voice or whistle and therefore begins to really take notice and learn them properly. So now after 3 months we have a dog who can go and get the sheep, bring them to me, hold them in a corner and take them away in whatever direction I desire, well more or less anyway.  Although there are a few more things I need to teach her we now enter another period of regular exercises involving all the things she has learnt so far to really make sure she fully understands what I expect.