Horse gin and cherry ladder – not words that you might expect to be seen together, but just some of the things that we have at Hill Farm Barn which originally stood off Joiners Lane in Chalfont St Peter. The date of the farm itself is uncertain, but the farmhouse contained a cruck truss believed to be 14th century, and occupiers of Hill Farm can be traced from 1696 onwards. 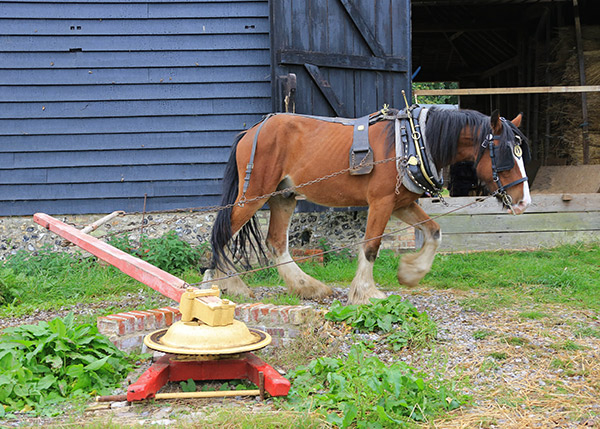 The barn is believed to be from the mid-19th century. The last farmer to occupy the farm was Henry Wheeler, who sold it to Chale Sever Bell in 1924, from when it was used as a weekend retreat. In 1966 a Building Preservation Order was issued requiring that Hill Farm and its outbuildings should not be demolished. At that time, the farm covered 11 acres. By 1968, nine of these acres had been developed for housing, and the developer appealed successfully against the refusal to demolish. COAM acquired the barn, and it has stood here since May 1986.

A horse gin (short for “engine”) can be seen outside the rear of the barn. A horse could be harnessed to this and as it walked round and round it drove a line shaft which enters the barn to provide power for the machinery. Inside the barn the shaft and its various pulleys came from Tilehouse Farm in Boreham Wood.

Later in its history, the source of power for the machinery in the barn was a static gas engine, a Crossley G111 number 86646, which was made to run on “producer gas”. This was a fuel made on the spot such as coal gas (in a small self-contained plant), wood offcuts or vegetable waste. On YouTube there is an example of Methane gas for domestic cooking purposes being made from kitchen waste and cow dung. Later this engine was replaced by a Lister A engine donated by Rugby Portland Cement (now Cemex). 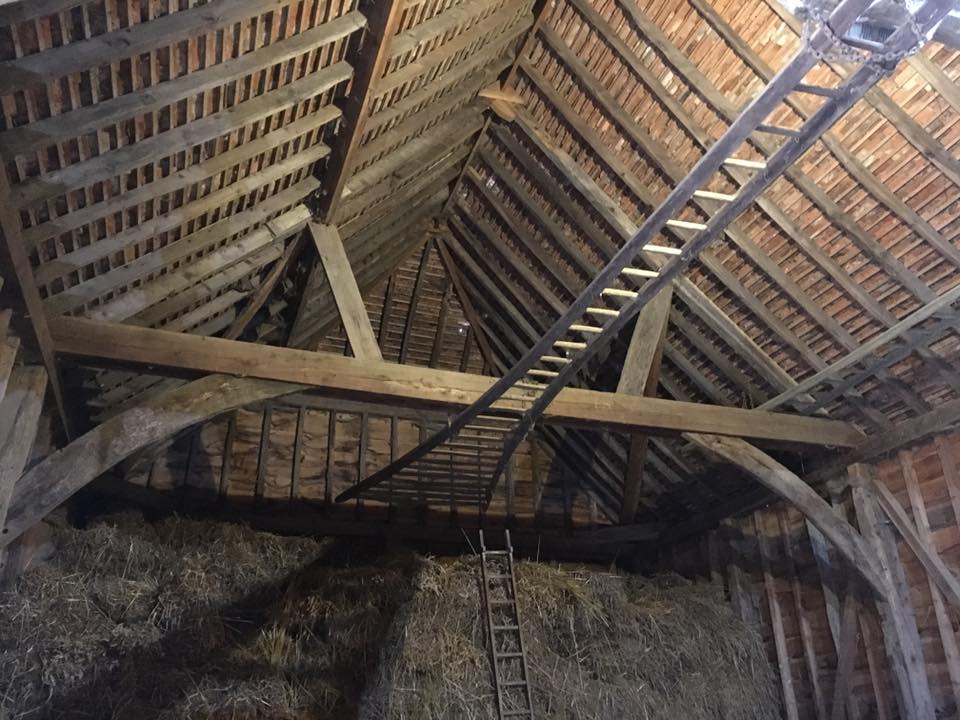 The cherry picker’s ladder which is 60ft long can be seen hanging inside the barn.

Cherry orchards were the county’s specialty. Today, the overall picture in Buckinghamshire is bleak. The Landscape Plan for Buckinghamshire states: “Changes in agriculture have (also) meant that orchards of cherry, plum and apple which were once common south of Aylesbury were reduced by over 90% between 1938 and 1994 and are continuing to disappear. The County Council’s ‘Survey of Orchards in Southern Buckinghamshire’ revealed a 39% loss in orchards between 1975 and 1995 in one of the areas previously most important for fruit production. The condition of those remaining orchards is generally poor.” 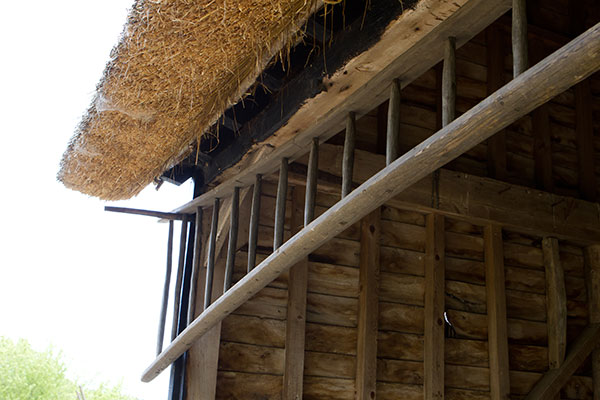 Cherry picking ladder hanging in the farm at COAM

“… Buckinghamshire … thinks highly of its “chuggies”, as the jet-black cherries are called locally, that the first Sunday in August is observed there as “Cherry Pie Sunday”. This marks the completion of the cherry harvest with the gathering of the late Prestwood Blacks, and it is the custom for cherry pie, or other delicious recipes such as cherry turnover or cherry duff, to be served in cottages and farmhouses”.

Seer Green Cherry Pie Fair (near Chalfont St Giles), June 22, still continues, and recently has been part of Seer Green’s Village Day, where there are locally made cherry pies for sale. They are keen to keep the fair going and the parish council has allocated money for cherry trees to be planted in the village. 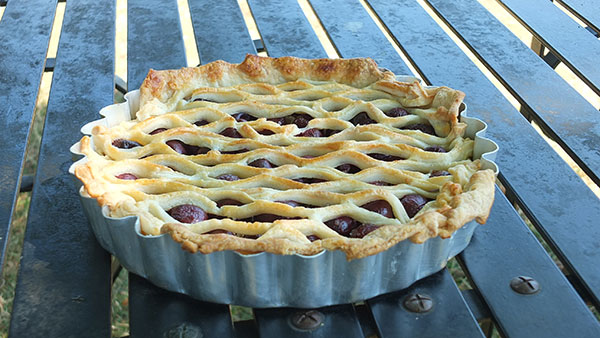 In 1974 a tin box found in the chimney of an old house in Seer Green contained the following recipe for Cherry Pie…
For pastie, use flour saved from the cleanings and lard from the fresh killed pig. Roll out verie thickly so as to contain the cherry juice and give boddie to the turnover…Gather a hatful of black cherries by moonlight. Those high up are better in taste. Let them ripe enough to contain the juice when gentile prest. Put a double layer in the pastie with four atop and seal with fresh drawn water from the well. Cook gentlie in the oven on a fire of faggots. Gather round and when the pastie is cool enough not to scorch the fingers, break off one end and drink the juice. Repeat….and yet again…and then again” – ah life is sweet!