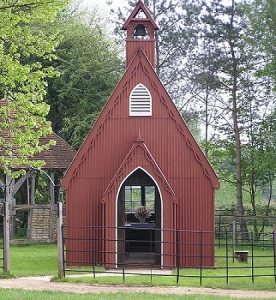 What do Prince Albert’s ballroom at Balmoral, Mr E. Moon’s Shepherd’s Hut in Watford, and Henton Mission Room have in common? They are all examples of “iron buildings”. After seeing a prefabricated corrugated iron cottage at The Great Exhibition in 1851, Prince Albert ordered a large, prefabricated building to serve as a temporary ballroom and dining room at Balmoral. It was erected in three weeks and first used for the gillies’ ball on 1st October 1851. It remained in use until 1856 and in 1882 was resited to its present position near the stables and game larders. A catalogue of such buildings manufactured by Boulton and Paul includes a Shepherd’s Hut which was ordered by Mr E. Moon of Cassiobridge, Watford for his gamekeepers. The catalogue prints a letter from him written in 1882 which states: “Gentlemen, I wanted your Shepherd’s Hut on wheels for the keepers while tending the pheasants, and they say they are pleased with it”. In 1886 the Rector and Churchwardens of Chinnor had our Mission Room erected at Henton, demonstrating the need for new buildings to accommodate the large population growth and movement at the end of the 19th century.

An illustration of the Balmoral building can be seen here

Between 1801 and 1901 the population of this country grew from 11 million to 37 million. There was also a move away from the countryside by many working people as they sought better conditions in the growing towns and cities. By the end of the 19th century no more than 10% of the population was engaged in agriculture. This meant that more and more buildings were needed in the towns, not just in the form of houses but also as warehouses, churches, meeting halls, etc. Iron sheets had been used to cover roofs since the late 18th Century and by 1829 corrugated iron had been developed and the process of coating the iron with zinc (galvanizing) was patented in 1837. This process increased the life of corrugated iron sheets significantly and by the 1840s several manufacturers were producing it. Corrugating an iron sheet makes it more rigid and allows the use of lightweight framing and larger sheets since the corrugated sheets are able to span greater lengths unsupported.

By the end of the 1850s corrugated iron was being used for the walls and roofs of many buildings. By the late 19th century there were several manufacturers offering ‘kit’ corrugated iron buildings. Corrugated iron churches, chapels and schoolhouses could be bought from a catalogue and large numbers of portable buildings were sent to Australia and California for the gold rush prospectors and newly set up farmers. Corrugated iron buildings were generally all constructed in the same way. There was a prefabricated timber framework usually built on a brick foundation. The walls were clad on the outside with corrugated sheets and on the inside with good quality tongue and groove boarding. There was usually a sheet of felt between the wood and iron. When the Mission Room at our museum was being dismantled an original delivery label was found under the corrugated roofing sheets which proved that the prefabricated building was supplied by Boulton & Paul of Norwich.

The Illustrated London News of 1853 variously referred to Hemmings Patent Improved Portable Building Manufactory, the Clift House Factory and to the Avon Clift Iron Works with a Board of Directors both British and Australian which was active in Bristol until 1854/55. When Hemmings transferred operations to Bow, London he continued working there in the same line of business until at least 1870. Hemmings’ principal claim to fame, perhaps, comes with his pioneering development of the portable or temporary church both for home requirements and for export. His original motivation was to provide his son, who was an Australian emigrant, with some form of durable shelter. His inventive mind evolved a house which combined portability with the facility to be erected by inexperienced hands. Other people on seeing it wished for similar accommodation together with more rooms and a shop and Mr Hemmings saw the prospects for adaptations. A catalogue of 1854 shows single cottages and medium and large houses, including one for the Archbishop of Sydney. Sumptuous villas were constructed which included butlers’ pantries and libraries at prices which varied from 50 guineas for a simple cottage to 850 guineas for the more elaborate buildings. Other examples of buildings were: commercial buildings, small shops, even rows of shops for Melbourne, a hotel for 80 persons consisting of 2 storeys costing 2500 guineas, a three-storey iron bazaar shipped to Melbourne in 1855, churches and a pub, appropriately named the Iron Duke, erected in Narberth, Pembrokeshire. The scale of this enterprise can be judged from the number of ‘packages’ shipped to Australia. In 1853 he shipped 6369 such items valued at £111,000 (approx. £10,000,000 today) and the following year 30,000 packages were valued at £247,000 (approx. £22,000,000 today). It was said that few other manufacturers could match his design or functional quality.

The reed organ or harmonium in the Mission Room was built by F. Estey & Co of Brattleboro, Vermont. In 1863 Jacob Estey became the owner of a company which had existed in various forms since 1846 making melodeons. The recent arrival of the railway meant that instruments could be ordered by mail and sent all over the country. By 1900 the company had made about 300,000 instruments and for many years was the largest employer in Vermont with around 700 employees. By 1960 when production ceased, they had made about 500,000 reed or pipe organs including the “Acclimatized Folding Organ” made for Christian missionaries working in tropical climates.

You can read more about Estey organs here in an earlier blog: The Henton Chapel Organ

You may also be interested in watching this short interview with Ned Phoenix, Founder of the Estey Organ Museum: www.namm.org/library/oral-history/ned-phoenix