At the far end of the museum site is a rescued and reconstructed building that was once part of Glory Mill, a paper making factory that was in Wooburn Green, High Wycombe in Buckinghamshire. The building is currently used by COAM to store dismantled historic buildings waiting for re-construction and as a workshop space for our buildings team. COAM Volunteer, Roger Coode, has been researching the history of Glory Mill and has written this piece for our blog. 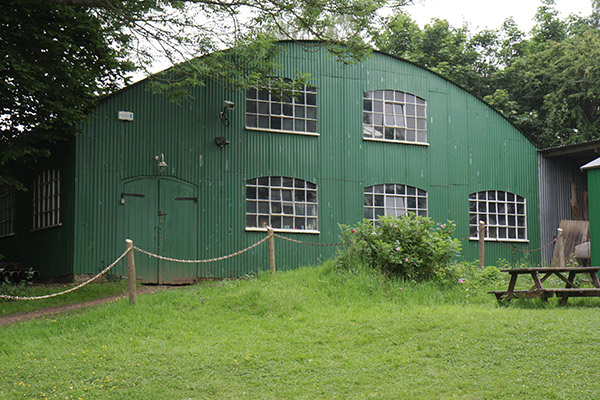 The Domesday Survey of 1086 lists twenty mills on the River Wye (or Wick) which flows through Buckinghamshire. At that time they were all producing flour, but during the 13th and 14th centuries cloth fulling became common using locally grown hemp. It was not unusual for the mills to grind corn and at the same time, by attaching large wooden hammers to the mill’s drive shaft, full the cloth. By the early 17th century fulling mills had virtually disappeared, but it was realised that the machinery used to full cloth could be adapted to beating to pulp the rags used in paper making. Paper making was going on by the end of Elizabeth I’s reign in 1603. In 1636 there were 12 paper mills in Buckinghamshire and there were eight paper mills near High Wycombe in 1690. In the 17th, 18th and 19th centuries paper making was a major industry on the little River Wye and in 1816 there were 31 paper mills.

Glory Mill was named after John de la Gloire who held the mill in 1235. It seems to have been producing paper from rags in the early 17th century. The Mill had several owners and the size of the mill increased, becoming a large factory. In 1850 mechanisation came with the installation of a 36ft 6in long Fourdrinier paper making machine. This speeded up the manufacturing process and therefore increased the mill’s capacity to produce good white paper. However, in 1894 the owners had to petition for insolvency and the Mill was taken over by Wiggins, Teape & Co. Despite a disastrous fire in 1898 when a considerable part of the Mill was burned down, after rebuilding and installing new machinery it was producing high quality paper by summer 1901. The building that we have at COAM was called the “Rag Warehouse” where bales of rags were stored and went through the first of several sorting procedures. It was dismantled and transferred to the Museum in 1987.

The First World War brought the need for air-reconnaissance photographs which led to a major phase of paper making innovation at Glory Mill. Photographs became a vital tool in the waging of the war. Consequently, Glory Mill built a new paper machine exclusively for the production of photobase paper. The country’s need for such paper in the Second World War was also satisfied by Glory Mill and it continued to make photographic base paper until its closure. The mill finally closed in 1999.