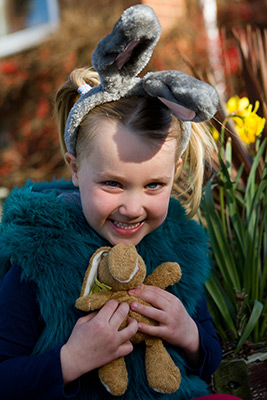 My daughter and I love Easter time.  Alex because she gets time off school and me because I love chocolate eggs!

As it is nearly upon us, we were talking about Easter the other day and that set me thinking about what Easter actually is and how its traditions came about?

Easter is a very important time for Christians as it celebrates the death and resurrection of Jesus.  Because Jesus died during the Jewish festival of Passover, the early Christians attached Easter to Passover.

I always get confused as to when Easter actually is as the date varies from year to year.  Apparently this is because the date for Passover is based on a lunar (phases of the moon) calendar, so Easter Day can be as early as 22nd March or as late as 25th April.  That’s because Easter Day is the Sunday following the first full moon after the first day of Spring.  Easter Day is always a Sunday as this is the day when Jesus rose from the dead, giving new life to the world,

Where did the name Easter come from?  Well some people believe it comes from the ancient pagan festival of Ostara which celebrated the coming of Spring and new life after the dark of winter.  This festival, which coincided with the time Jesus died and was resurrected, was taken over by the early Christians to celebrate the new life that Jesus gave the world when he rose from the dead.

The run up to Easter is called Lent which represents the 40 days and nights when Jesus was tempted by the devil in the desert.  As Jesus did not eat or drink during this time, some people give up a favourite food or drink for Lent.  That is why people eat Pancakes on Shrove Tuesday as traditionally it was a way of using up all the fattening ingredients in the house before fasting for Lent.  Clever!  The name Shrove comes from an old English word shriven which means to confess and receive forgiveness for ones sins.  The first day of Lent is called Ash Wednesday which comes from the tradition of putting a small cross of ash on peoples forehead at Ash Wednesday church services to remind them that they rely on God for forgiveness from their sins.  Easter officially ends 49 days after Easter Day with Pentecost or Whitsun, when Christians remember that God sent his Holy Spirit to help them.

What about the eggs, I hear you say?!  Since pagan times, eggs and chickens have symbolised fertility and new life.  The early Christians took over this meaning to help them remember the new life Jesus brought after he rose from the dead.

As we all know, Easter Eggs are brought by the Easter bunny!  During pagan times, hares and rabbits were a symbol of new life as they have such big litters.  The story of the Easter Bunny really took off in the 19th century and over time has evolved into the Easter Bunny bringing chocolate and toys as well as eggs.

Finally, when tucking into my Easter Day lunch, I’ve often wondered why we eat lamb at Easter?  One reason is that many years ago people believed the devil could take the form of any animal except the lamb.  Others believe that Jesus would have eaten lamb at the last supper.

I hope that you will spend some time at the Museum over the Easter holidays as there is lots going on.  I’m off now to buy some chocolate eggs!