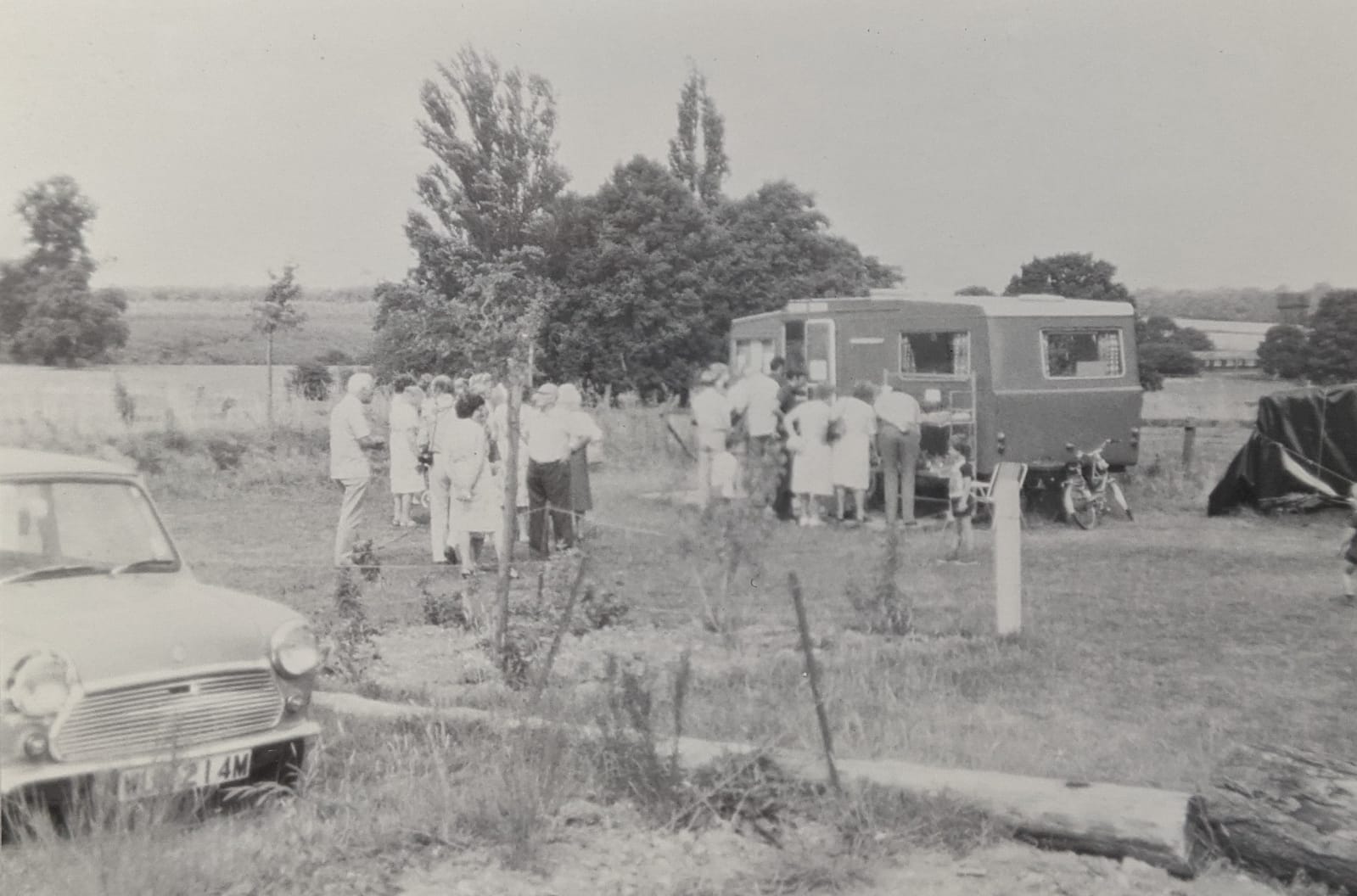 Imagine the scene on the morning of Sunday May 3rd, 1981. The volunteers who had been working on the development of Chiltern Open Air Museum since the land was acquired in 1978 were making last minute preparations for the formal opening. Hand-painted notice-boards were being erected around the site, the twenty wardens were being given last minute instructions and cakes were being delivered by the caterer. This was the culmination of months of planning and hard physical work and, with five buildings complete, or in progress, everyone was excited and anxious. Would visitors come? Would it all have been worthwhile? 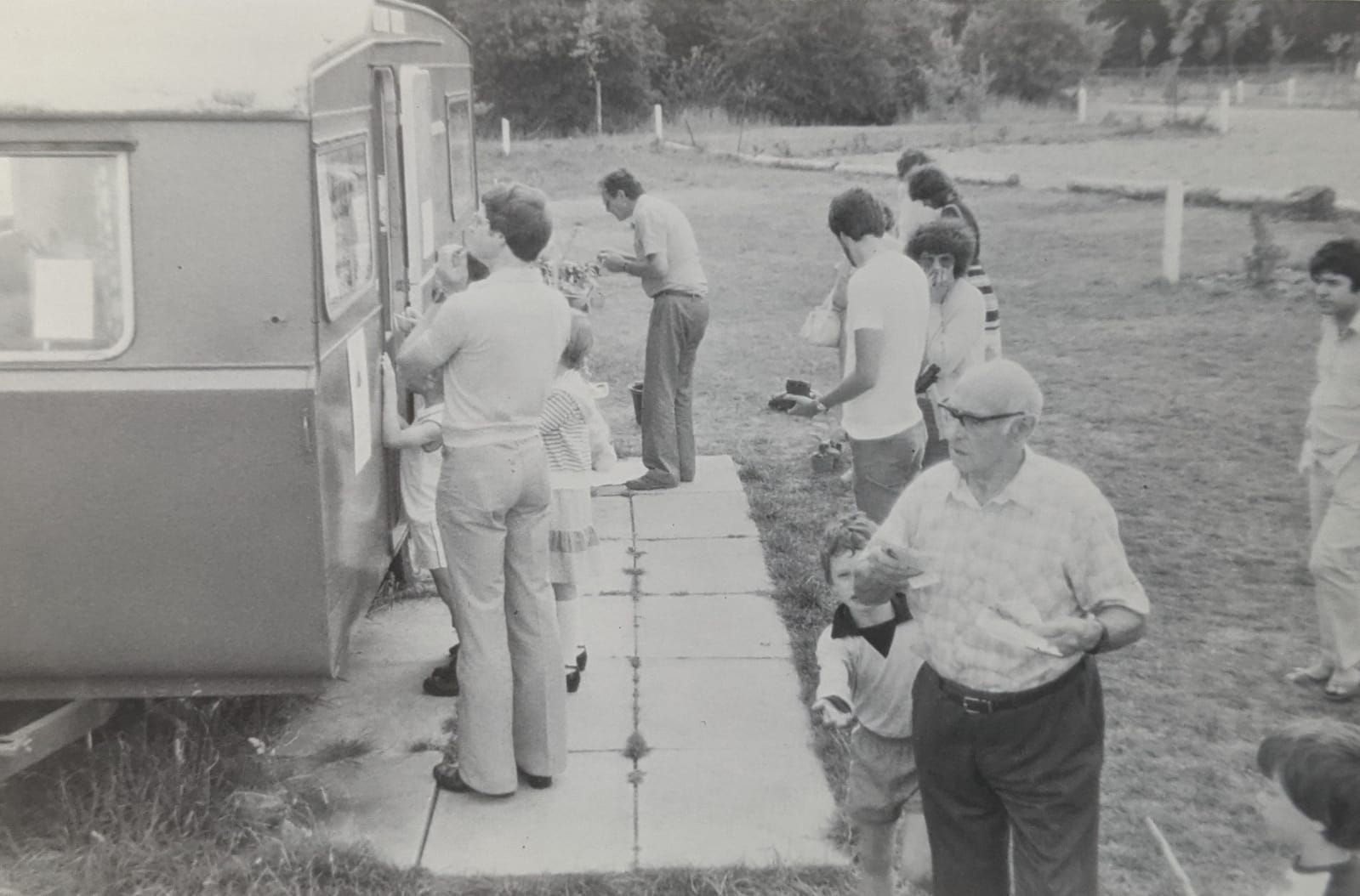 Visitors waiting outside the museum’s ticket office in 1981.

Unfortunately, by the scheduled opening time of 2pm, heavy rain and strong winds had set in but, despite this, a substantial number of people did brave the weather to support this new venture. On arrival, visitors parked in the field that was acting as the temporary car park and bought their tickets at the old caravan which served as a ticket office for the first six years. On opening day, these tickets were 50p for adults, and 20p for children and over-65s; the price had been kept low to reflect the limited number of buildings on display.

Once they had their tickets, visitors walked along the side of what is now Thomas’s field to the museum entrance, at the site where the Forge now stands.

The first building that they would see was the Wing granary, a baker’s flour store dating from the 1820s. This building had not been dismantled to move it to the Museum and apparently had caused quite a stir as it was transported across Buckinghamshire on a low-loader! 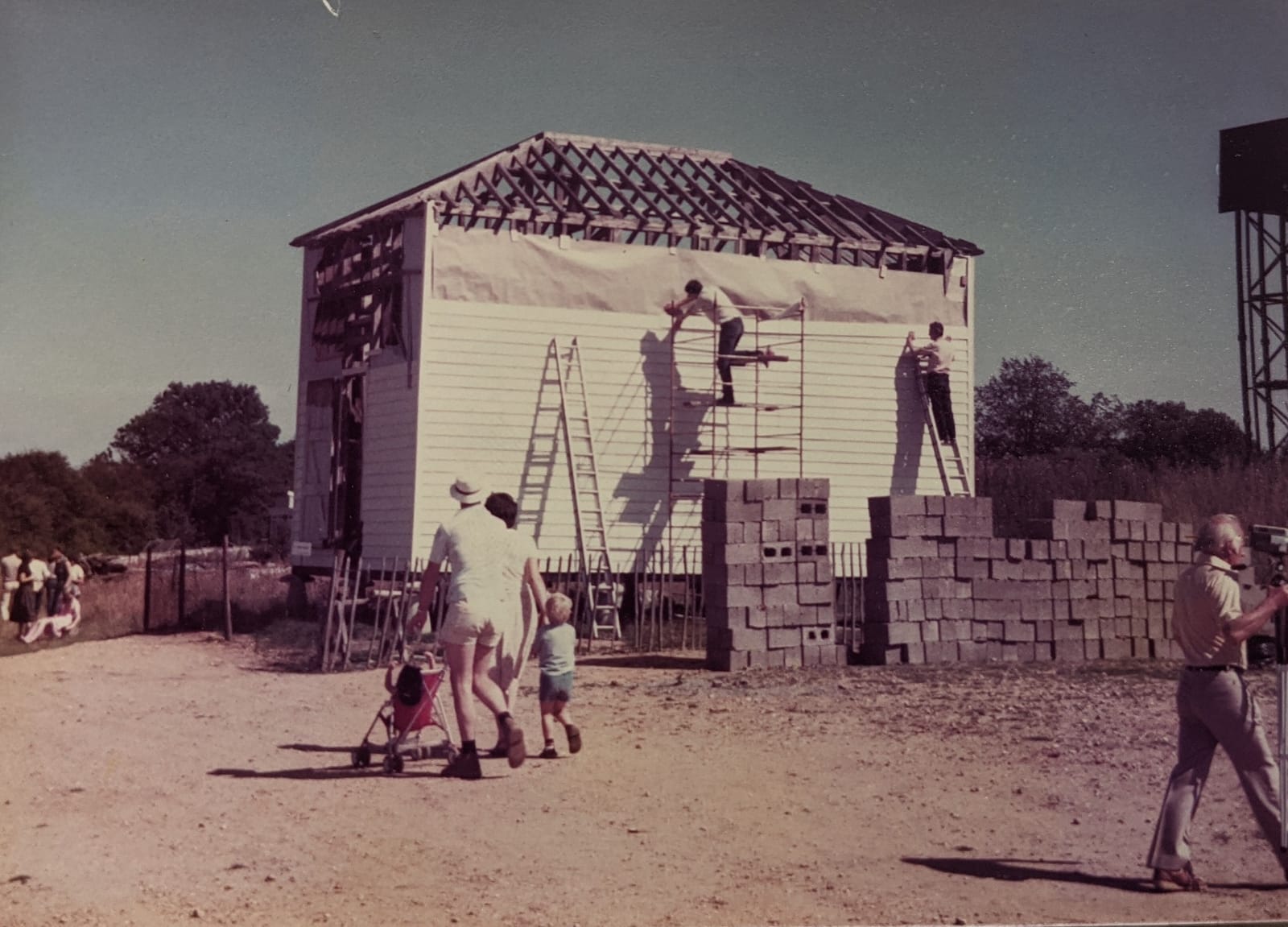 Rossway Granary under construction in 1981.

Close to the Wing granary, visitors could view the slightly older Rossway granary. This had been dismantled for its move from a farm near Berkhamsted and, although its re-erection was progressing well, it was still incomplete.

Nearby, was the Arborfield barn, thought to date from around 1500. The thatching on this cruck barn had been completed in April although, at the time of opening, the woven oak in-fill of the walls had not been put in place. 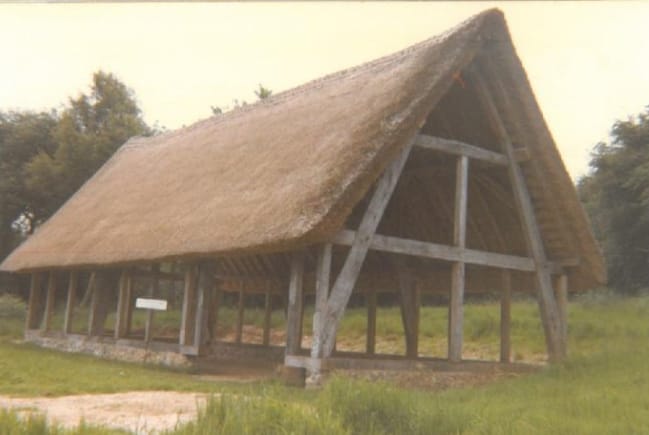 Not far away was the Iron Age House. This, of course, had not been moved there but was a reconstruction built by the Manshead Archaeological Society, based on archaeological finds around the Chilterns. Access to it was made slightly difficult by the fact that, at the time, a public footpath ran through the museum site. The path had to be fenced on both sides to stop walkers wandering into the museum and a warden was stationed at a gate to allow visitors through to look at the Iron Age House. 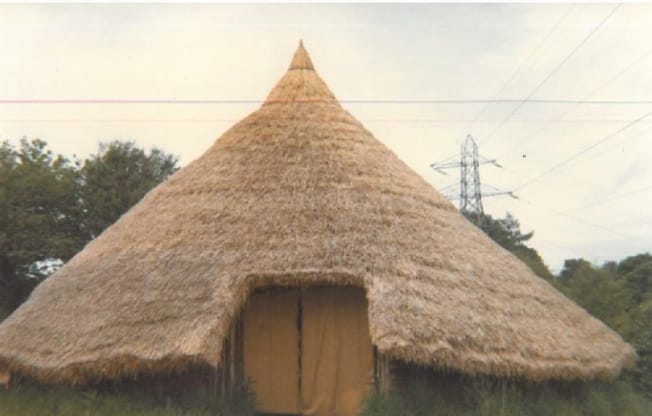 The final building on display was the mid-Victorian Didcot cart shed, located at the rear of the site, by the old car park. A second caravan stationed here provided refreshments.

In addition to the buildings, visitors could view an exhibition of old tools and farm implements which were awaiting repair, and enjoy a Nature Trail through the beautiful Chiltern countryside.

Was the opening a success? The Chiltern Society News* records that 100 people braved the elements to visit the museum on that opening Sunday and all claimed to have had a lovely time. The next day, Bank Holiday Monday, the sun shone and 500 visitors arrived. 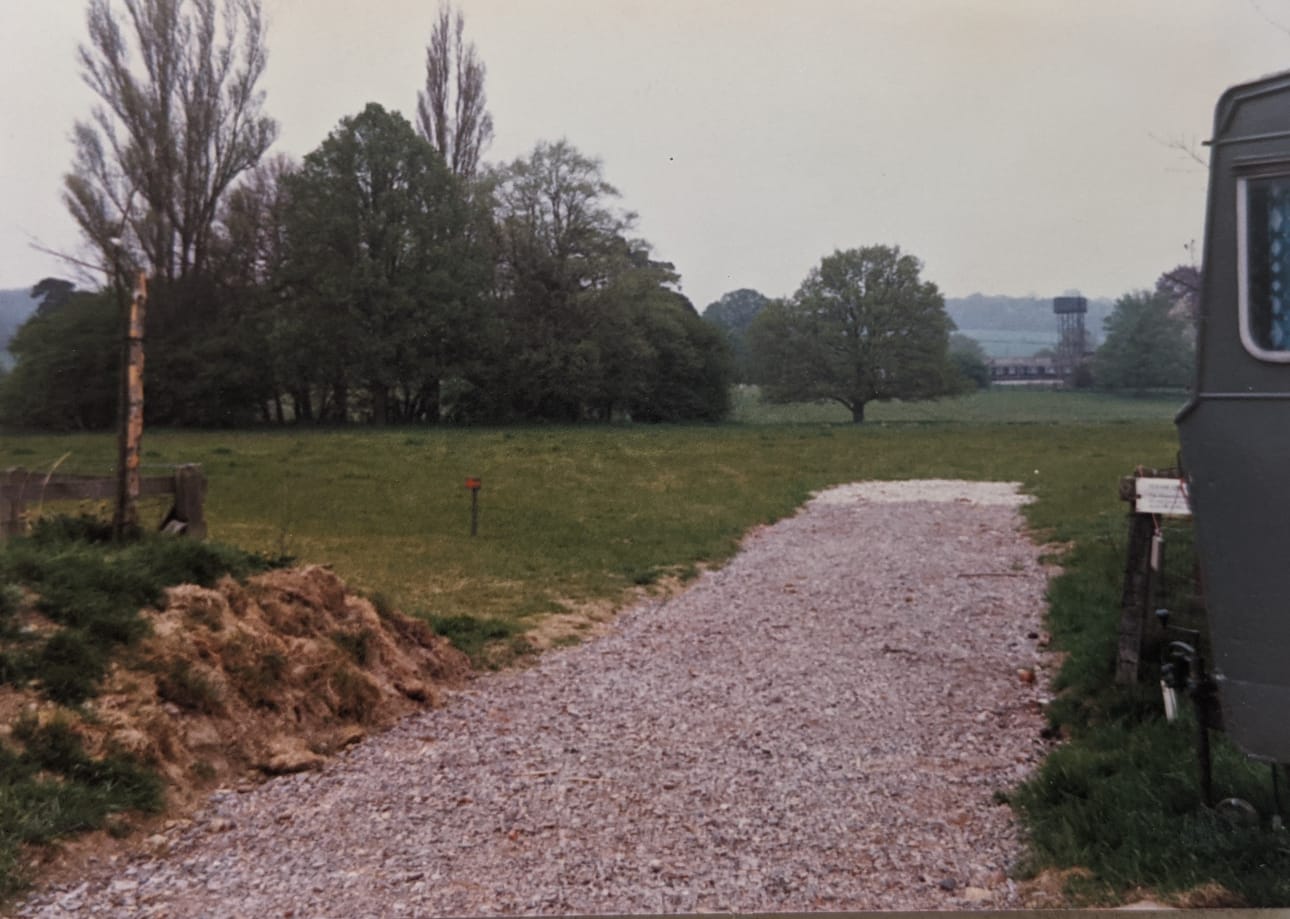 The plan was to open every Sunday afternoon and Bank Holiday Monday throughout the year. The weather seemed determined to ruin this plan as it rained almost every Sunday that year and Spring Bank Holiday was a washout. However, despite the weather, the difficulty people had in finding the Museum through a lack of sign-posts and the very muddy car-park, by mid-June the museum had recorded 1500 visitors. By the end of September, this had risen to 6000.

Looking back forty years later, there is no question about whether the Chiltern Open Air Museum is a success. There are now 37 buildings on show with another 15 in store awaiting erection. The Museum is a popular place for school-trips and holds a large variety of events and experience days every year. In 2019, it welcomed more than 56,000 visitors. During 2020, although the number of visitors was reduced, it offered a very welcome respite from lockdown – a place where people felt safe and relaxed and could still enjoy the beautiful location. Bring on the next 40 years!

*Chiltern Open Air Museum was started by a group from the Chiltern Society.