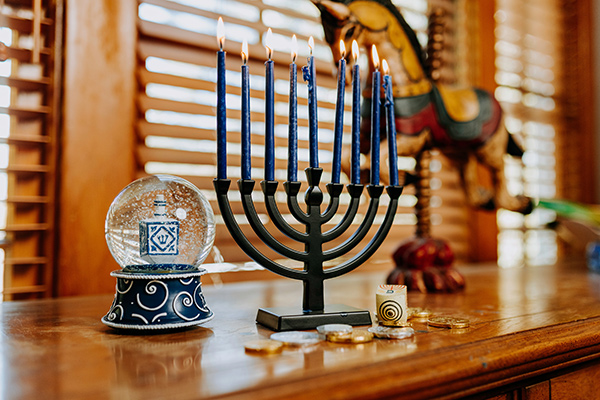 Chanukah, or the Festival of Rededication, is an eight day festival in the Jewish calendar. It celebrates the rededication of the Temple in Jerusalem after its defilement by the Seleucids (who were one ruling Greek empire after Alexander the Great’s) in 164 BCE. It is also known as the Festival of Lights and usually takes place around December, at the time of year when the days are shortest in the northern hemisphere.

Beginning in 167 BCE, the Jews of Judea rose up in revolt against the oppression of King Antiochus IV Epiphanes of the Seleucid Empire. King Antiochus had enacted many oppressive rules, including prohibiting the practice of Judaism and enforcing the sacrifice of pigs in the Temple. The military leader of the first phase of the revolt was Judah the Maccabee, the eldest son of the priest Mattityahu (Mattathias). In the autumn of 164, Judah and his followers – the Maccabees – were able to capture the Temple in Jerusalem, which had been turned into a pagan shrine. They cleansed it and rededicated it to God. This event was observed in an eight-day celebration, which was patterned on Sukkot, the autumn festival of huts because they had not been able to celebrate it earlier in the year. The events are described in the first and second Books of Maccabees which are in a collection of texts known as the Apocrypha.

This miracle of being able to practise one’s religion at this time by overthrowing the oppressive rule of King Antiochus IV was a cause for celebration. However, there was another story which was also passed on that celebrates an even more remarkable miracle. When the Maccabees came to rededicate the Temple they needed specially made olive oil to light the Menorah (the Temple’s seven branched candelabra). They searched the ruined building and found just one container of oil which would only last one day. They needed much more in order to have time to make new oil. In an act of faith, the Jews used the oil to light the Menorah nonetheless and by a miracle, the oil lasted for eight days. In celebration of this miracle and that of the protection of Jewish life over 2000 years ago, Jewish people around the world light a special menorah (candelabra) which has eight branches and is sometimes called a Chanukiah. Each night of Chanukah a ‘helper candle’ is lit and used to light the candles: on the first night, one candle is lit; on the second night, two candles; and so on until on the eighth night all the candles are lit.

The festival of Chanukah has become even more popular because it often falls around Christmas time and other festivals of light, including Diwali. In the middle of the winter months, the increasing light of the Chanukiah gives us hope that the days will once again start getting lighter and that there will be a time for everyone to celebrate their faith in freedom and without oppression.

So is it Chanukah, Hanukkah, Chanukkah or Chanuka?

The word is a Hebrew word which means dedication and is also connected to the Hebrew words for education – because when we learn we dedicate ourselves to understanding the world around us. Hebrew is written from right to left and the opening sound is similar to the ch in loch. The word looks like this:

There are lots of ways to transliterate the Hebrew letters into English. But no-one will be offended if you write to wish them ‘Happy Chanukah’ or ‘Happy Chanukkah’ or ‘Happy Hanukka’, they will just be delighted to receive your greetings! 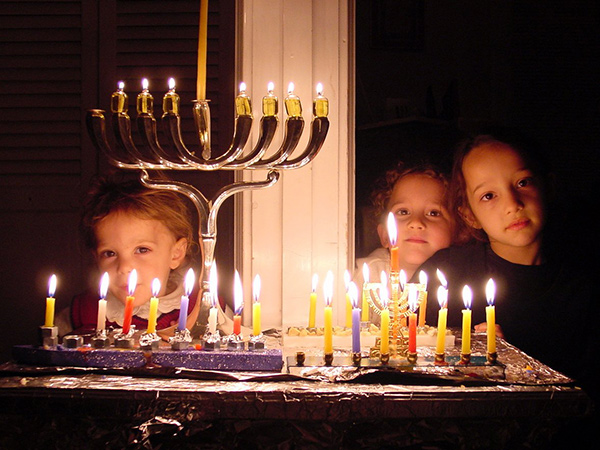 The chanukiah, if safe, is placed in the window to ‘publicise the miracle’ of Chanukah. The candles are lit at night and the shammash (the helper candle, slightly separate from the others) is used to light each candle. The candles are put into the chanukiah from right to left and then lit from left to right. An extra candle is added each night. Some families have one chanukiah and some have one for every member of the household. The Chanukah candles are not supposed to be used for anything – they are for the purpose of being reminded of the miracle and nothing more. Each night one begins by lighting the shammash, and while holding it one says two blessings. The candles are then lit. 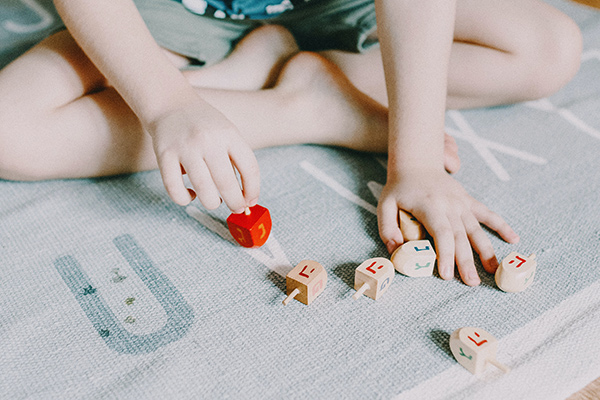 The Dreidel, also known as Sevivon (spinning top), is a form of dice game which originates in the middle ages. The sides of the spinning top are the letters ‘nun’ ‘gimmel’ ‘hay’ ‘shin’ – which stand for the Hebrew phrase: “nes gadol hayah sham” (A great miracle happened there). In fact, there was a German dice game with the letters: N, G, H and S from which the Hebrew letters were most likely adapted. N = Nichts (do nothing); G = Ganz (player wins all the tokens); H = Halb (player wins half the tokens); S = Stell Ein (player puts a token in).
It is customary to give children pocket money, known as Chanukah gelt, after the lighting of the chanukiah. This practice of giving gifts has grown in the last few decades, probably under the influence of the commercialisation of Christmas. As with all Jewish festivals, charitably giving is an important aspect of celebration and children are often encouraged to give to charity as part of their giving habits. 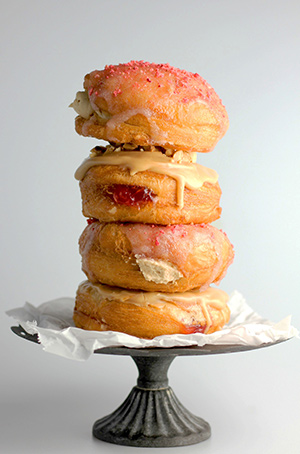 It is traditional on Chanukah to eat foods fried in oil as a reminder of the miracle with the oil. Ashkenazi Jews, whose origins tend to be from Eastern Europe, eat potato latkes, or pancakes, while another custom is to eat sufganiyot, jam-filled doughnuts. Sephardi Jews, whose origins include from Spain, North Africa and the Middle East, will often eat sweet cheese pancakes and bumuelos (puffed deep fried fritters).