Chiltern Open Air Museum to Feature on the BBC’s Countryfile

On the 19th September the BBC’s Countryfile visited the Museum to find out more about Harvest and its traditions.

At the heart of the Museum is a working historic farm with arable fields and livestock that is run (as much as possible) using traditional methods and equipment. The farm has the equivalent of two full time staff and is supported by a large team of wonderful volunteers. 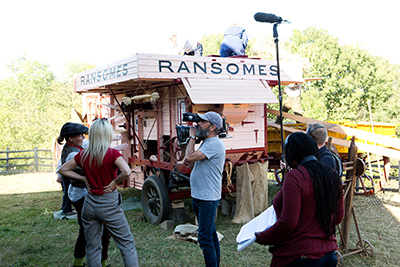 Countryfile presenter, Helen Skelton, interviewed the Museum’s Farm Team to find out how they restored a beautiful pink 1947 Ransomes threshing machine and the role the machine would have played in farming history.

The programme also features our apple orchard, where each tree is a different heritage variety. Helen chatted to volunteer, Keith Baggaley, about the different types of apple and how they are harvested and then pressed into apple juice that is then sold at the Museum. 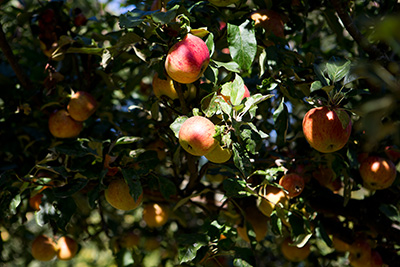 Our red tin chapel, from Henton, was decorated in beautiful straw plait sculptures made by straw plaiters and volunteers, Heather Beeson and Veronica Main. Helen chatted to Veronica about the art of straw plaiting and the important part it played in a traditional Harvest.

Helen Skelton and the Countryfile crew were absolutely lovely to work with and really friendly and genuinely interested in the work that the team here do.

You can watch the show on BBC iplayer 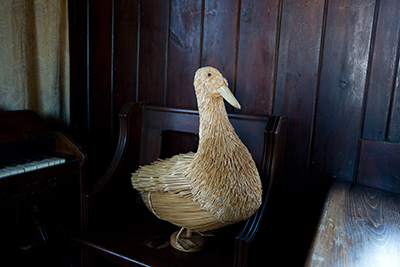 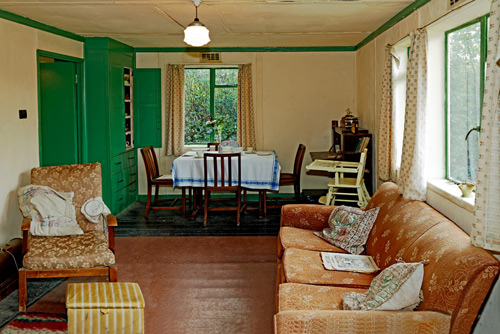 All quiet on the farm

January arrived with an air of peace and tranquillity about the farm and Museum site. This followed a disrupted December when for a number of weeks much of the site, including the farmyard and barns was taken over by a film production team, actors, extras and the associated entourage involved in a major TV drama.

With the Museum closed to visitors and school groups from December until late February, it is the perfect time for Museum staff and volunteers to get on with tasks, particularly those that would impact on visitors if the Museum was open.

The progress of many tasks would be so much quicker if it was not for visitors wandering around, getting in the way and engaging staff and volunteers in conversation! If only there were not any visitors. So much could be achieved!

Even though there are occasional times when it might be nice not to have to worry about visitors, there is not a member of staff or volunteer who does appreciate and enjoy the interaction. Volunteers give up their time and staff choose to work at the Museum because they get pleasure seeing visitors, whether retired reminiscers, historical enthusiasts, exuberant school children or just those wanting to relax in a wonderful rural environment, enjoy their visit.

The problem is that everyone enjoys engaging with visitors, whether imparting knowledge of the buildings and artefacts, offering directions or advice or just passing the time of day. This can of course slow down the completion of tasks. However, everyone relishes their role in ensuring that visitors have an enjoyable and safe visit.

So whilst it was quiet, the farm team were getting on with the tasks in hand. There was firstly the need to return artefacts removed for filming back to the farm buildings. Fortunately there had been minimal physical impact on the farm site, which was a relief considering the number of people involved as well as the vehicles used. 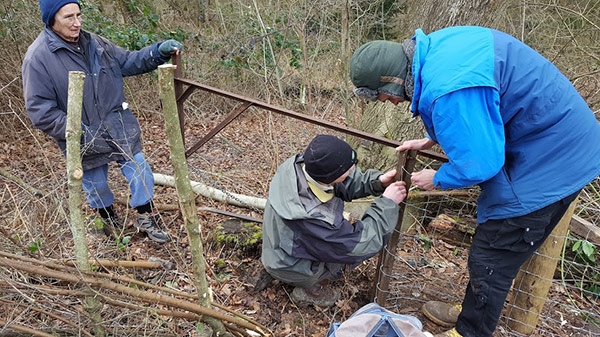 A key winter task was to increase grazing available for the farm’s livestock. With pressure on existing grazing space, it was decided to open up Toll House field and other areas where scrub had encroached in recent years.

Volunteers worked hard to remove intrusive scrub, much of it hawthorn and bramble.  These have the habit of fighting back, inflicting minor wounds on any unguarded parts of the body, ripping into clothing and causing just a little cussing!

With the scrub cleared, it will be easier for grass and other meadow plants to re-generate. But it is also important to control scrub re-growth. So bring in Beverly and Crystal, the farm goats who will be the first animals to use the field as they will enjoy munching away at any intrusive re-growth. 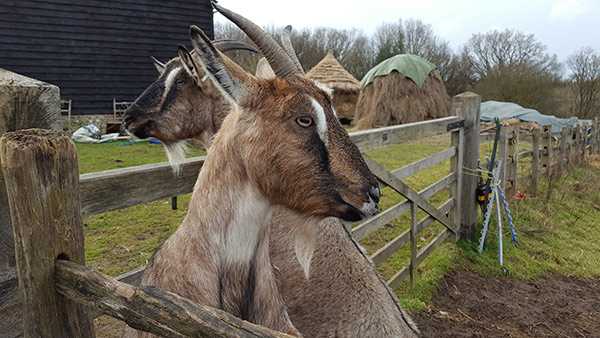 As well as clearing the scrub, a bigger task was to ensure that the hedging and fencing was in a suitable condition to stop the escape artist goats and lambs from testing the boundaries out. One side of the field had a relatively recently planted hedge that was just about ready for laying. This has now been laid and filled with some of the cut scrub to ensure there are no holes for stock to squeeze through whilst the hedge continue to develop its strength.

The next stage of field preparation was to renew stock fencing where the hedge was not a sufficient barrier, particularly for inquisitive lambs. And with this complete, staff and volunteers have moved on to mending or renewing fencing in other fields including the Hidden Meadow, which is also part of the plan to increase stock grazing capacity.

Another more mature hedge was laid in one of the arable fields through December and January. Whilst this work was being completed, the farm’s artefacts team commenced working of the renovation of a Fordson Super Major tractor and a hay sweep, but more on these in separate blogs.

The Museum’s peace and tranquillity was shattered towards the end of February with the visit of Doris. She was an unwelcome visitor that all were pleased to see the back of. Causing havoc across many parts of the Chilterns, storm Doris gate-crashed the Museum inflicting damage on some buildings as she rampaged across the site. Fortunately for the farm team, there does not seem to have been any major damage to farm structures or woodland. So staff and volunteers can continue to focus on the planned activities prior to welcoming all ‘well-behaved’ visitors on 1 April. 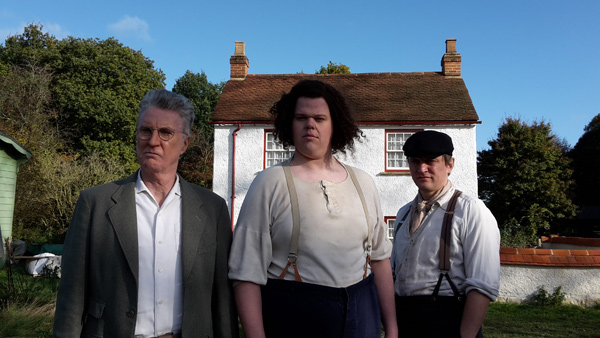 Chiltern Open Air Museum recently played host to a Sky Arts film about Samuel Beckett and the famous wrestler André the Giant. The film featured ‘Shameless’ star actor David Threlfall and aired recently on Sky Arts; if you missed it, it’s still available on catch up.

The filmmakers used the Museum’s rescued Haddenham Cottage and the beautiful Chilterns landscapes at the Museum to represent the French countryside where Samuel Beckett lived later in his life and commissioned a cottage to be built. The story is about André, the son of the French builder working on Beckett’s cottage: André, who has gigantism, is unable to go to school on the bus with other children so Beckett drives him to school each day in his truck.

The school scenes take place outside the Museum’s cast-iron Edwardian toilets and Astleham Cottage, which represent the French school in the story. Haddenham Cottage, which visitors to the Museum may recognise as the white cottage made from ‘wychert’ (a unique local building material), features in the first scene of this short film where Becket and André’s father are in the living room watching television. The Museum’s Victorian forge also makes an appearance as the home of André and his father, and some lovely night scenes showing the forge lit up were actually filmed early on Bonfire night, narrowly avoiding the sound of fireworks in the background!