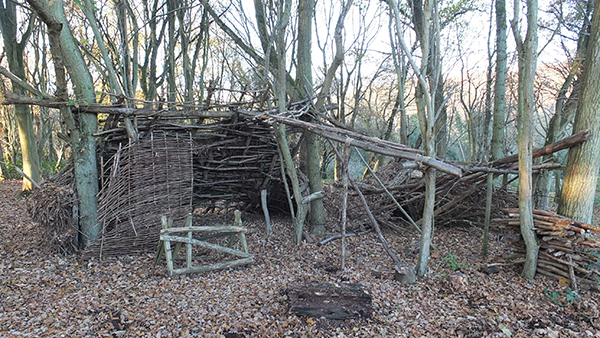 Chiltern Open Air Museum prides itself re-constructing local historical buildings for preservation as well as the occasional construction of replicas of buildings long lost. Experts and enthusiasts dedicate many hours, days and even years of hard, painstaking work to ensure all projects adhere to the highest quality standards the building works require. So any utterance about ‘a bodge job’ might not be too well received.

But this might not always be the case in some parts of the Museum. In fact, a new project, due for completion in 2017, could be referred to as a ‘bodge job’ as it requires the erection of a new bodgers hut.

Visitors may have spotted in the woods, close to Aborfield Barn, a now rather sad looking construction which resembles a semi-derelict shelter of some type. This in fact is the remains of a previous ‘bodge job’ completed some years ago as a recreation of a typical bodgers hut.

‘Bodge job’ has become a rather pejorative term expressing a hurried and carelessly completed job. But where it originates from is not exactly clear as the word ‘bodge’ has a number of originations. Any pejorative associations of are unlikely to have originated from the Chiltern bodgers who were important to the High Wycombe furniture industry of yesteryear.

So who were these bodgers and why the hut? Bodgers were highly-skilled itinerant workers who played a vital part in the local furniture trade using their pole lathing skills to produce furniture components such as chair legs, rungs and stretchers. There activities were conducted in the beech woods around High Wycombe using timber directly from source that was worked with to produce these components. The crafted items would be left in the woods for seasoning before being sent to chair makers.

Bodgers huts were temporary constructions that were used by bodgers for shelter. Often simple lean-to type constructions using trees for support, these huts would use lengths of timber lashed together with a thatched roof using available material including bracken and straw. They might be open or closed structures to keep out animals.

Bodgers, which became all but redundant around the middle of the last century, would move around the woodlands to where they could source their timber and hence the temporary nature of their shelter requirements.

The bodgers hut at the Museum was constructed to allow demonstrations of pole lathing as well as being used as shelter for volunteers engaged in making hurdles that are used around the farm. But the hut is now in a sorry state of repair and will be taken down and replaced by a new simple structure using materials sourced from the Museum’s own woodland.

So it is hoped that once the hut is completed, occasional displays of pole lathing, as practiced by the bodgers of yesteryear, can once again feature.